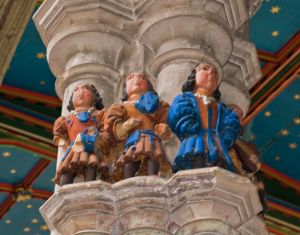 It is rare that one small town boasts two superb historic churches, but that is the case for the East Yorkshire town of Beverley. The most famous of the two is without doubt Beverley Minster, a wonderful monastic church. At the other end of town, just inside the last surviving medieval town gate, stands the glorious medieval church of St Mary.

Sir Tatton Sykes, prolific church rebuilder, once famously remarked that the west front of St Mary's was 'unequalled in England and almost without rival on the continent of Europe'. Now, Sir Tatton may be forgiven for seeing the church with the rose-tinted spectacles of local enthusiasm, the truth is that St Mary's is a beautiful church, and must stand in the ranks of the great parish churches of England.

The west front which moved Sykes so much is from the late 14th century, but St Mary's was founded in 1120. The foundations of that early Norman building can still be seen in places. The nave was rebuilt with north and south aisles in the 13th century, when the current chancel was added.

The interior features a font made of Derbyshire stone in 1530 as a gift from William Leryffax, a local draper. Near the font is the War Memorial Door, built by Robert 'the Mouseman' Thompson of Kilburn.

St Mary's is perhaps best known for its beautifully carved pillars. One of the most famous of these is The Minstrel Pillar, one of fully 34 musical-themed carvings in the church. The Minstrel Pillar shows five carved and richly painted figures of musicians standing atop the column capital. 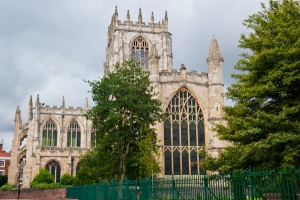 Another famous carving is found at the entrance to St Michael's Chapel, where one of the pillars is decorated with a delightful carving of a rabbit dressed as a pilgrim. The rabbit carving dates to about 1330 and is thought to be the inspiration for Lewis Carroll's White Rabbit in Alice in Wonderland.

Near the White Rabbit carving is the Vestry, where the ceiling is beautifully painted to represent a map of the heavens. A final curious carving is an Imp, guarding the entrance to the Priest's Room.

The chancel dates to about 1280, with a timber roof from about 1445. The choir stalls also date to 1445 and feature 28 beautifully carved misericords, including one of a Green Man and another depicting an elephant. There is also a scene of bear-baiting, a boar hunt, and a wild man who looks very like a Suffolk woodwose.

On the exterior wall of the south transept is an oval memorial to a pair of Danish soldiers. The text tells a tragic tale of the Danes, brought to England by William of Orange.

Here two young Danish soldiers lye
The one in quarrell chanc'd to die.
The others Head by their own Law.
With sword was severed at one Blow.
December the 23d 1689. 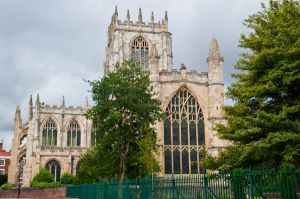 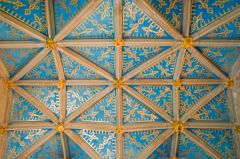