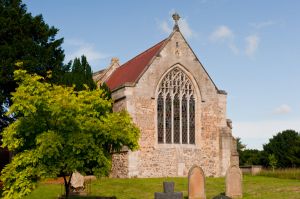 The church of St Mary's at Brandesburton dates to the Norman period, and retains its Norman priest's doorway. The chancel and nave are 13th century, with the addition of a 14th-century clerestory.

The most interesting historical feature is a wonderfully detailed late 14th-century brass set in the floor of the chancel. This depicts Sir John de St Quintin (d 1397) and his wife Laura (d 1369) and shows great detail of the clothing worn during that period. Sir John's headless brass shows him in full armour and Laura St Quintin is dressed in a long gown. She wears a linked chain necklace and pendant and has an elaborate headdress.

Sir John's will records that he left money for a pair of 12-pound candles to be burned beside his body on the day of his death.

A second medieval brass commemorates William Darrell, who served as the rector of Halsham from 1364 until his death in 1368. Like Sir Simon, Rev Darrell's head is missing from the brass.

On the wall is a memorial tablet to Rev Charles Richardson, who died in 1755.

There is also a very fine funeral hatchment to a local family and a royal coat of arms to George IV.

The chancel arch is 15th century, and the font bowl is medieval, though it stands on a 19th-century stem and base. 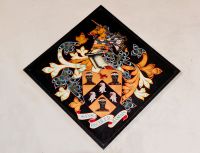