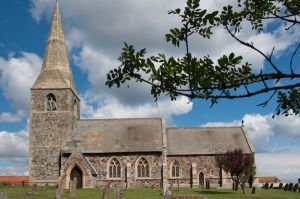 The church of All Saints at Mappleton stands just inland from the sea. It is an essentially Victorian church, with a striking steeple built of stone salvaged from a shipwreck. The church was roofless in 1854 when a ship bearing a load of Tadcaster stone north ran aground at Mappleton.

The people of Mappleton were not slow to seize upon the bounty of the sea and completed the roof and spire with the stone flotsam.

The first historical record of a church at Mappleton comes in 1149 when King Stephen granted it to the Abbey of Albermarle. Almost the entire medieval church was rebuilt in 1855, though a section of the north chancel wall was retained.

Near the entrance is an octagonal 15th-century font bearing the arms of the St Quintin and Fitzhugh families.

Most of the stained glass is modern, as much of the original glass was destroyed by German bombs in WWII.

Richmond Castle and the River Swale

More self catering near Mappleton, All Saints Church >>

More bed and breakfasts near Mappleton, All Saints Church >>

The Old Deanery is a Hotel Restaurant and Bar located directly opposite the stunning Ripon Cathedral in the market town of Ripon North Yorkshire. Our historic building dates back to 1625 so if you're looking for something that little bit different; you won't be disappointed. With 11 unique rooms and … more >>