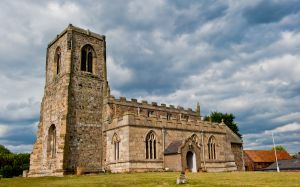 All Saints Church in Skipsea is a largely Perpendicular church situated on a mound looking out over the former mere of Skipsea Castle. The castle mound can be seen through a belt of trees in the field immediately beyond the church (though to access the castle you need to go around by road to Skipsea Brough).

All Saints is built of cobble with some dressed stone and consists of a nave with clerestories, chancel, west tower, aisles, vestry, and south porch.

The first church here was built in 1190, under the patronage of Odo, Count of Albemarle. It was later granted to Aumale Abbey (and later still to Meaux Abbey). This early building was completely rebuilt in the 14th century, and the east window and nave arcades survive from this time. The battlemented clerestories were added in the 15th century.

Carved heads by the east window may represent one of the early Edwards and his queen, perhaps Edward I and Eleanor of Castile?

The oldest interior feature is a medieval incised grave slab tucked into a corner under the tower. This is said to be the lid from the coffin of a medieval priest, and you can clearly make out the outline of two chalices on the worn stone.

The east window is a lovely 20th-century stained glass creation acting as a war memorial to villagers who died in WWI. The beautifully simple font was given by Archdeacon Long in 1869.

More self catering near Skipsea, All Saints Church >>

More bed and breakfasts near Skipsea, All Saints Church >>