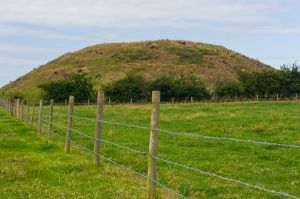 Substantial remains of a Norman motte, or castle mound, erected prior to 1086 by Drogo de Beauvriere, Lord of Holderness. Skipsea was one of the first Norman castles in Britain, and it served as the principal residence for the Lords of Holderness before they built a new manor at Burstwick.

A chapel was added to the castle before 1102, and a planned town known as Skipsea Brough was established near the castle around 1135 by Count William le Gros. Some remains of this settlement can still be seen, and even to this day, a cluster of cottages near the castle site bears the name Skipsea Brough, though it is not clear whether the cottages are actually on the site of the Norman settlement.

Henry III ordered Skipsea to be slighted (made unusable) in 1221, after the owner, Count William de Forz II, rebelled against the crown. It is not certain that the king's orders were ever carried out, but it seems that the castle was abandoned shortly after that time, and the area used to pasture livestock. The borough was also abandoned, and the site seems to have deserted by 1350.

The castle site survives as extensive earthworks with short sections of cobbled wall. At the base of the motte is a flat area that was likely once a defensive mere, or area of marsh, connected to a bailey enclosure 100 yards away.

The most interesting thing about visiting Skipsea Castle is that the site is set in open farmland, so open, in fact, that you can easily see the extent and shape of the bailey banks and ditches that surround the site.

As a result, you can really get an appreciation of the scale of the defences, something that is often difficult to do at many motte sites which have been encroached on by modern civilisation. The other remarkable thing about Skipsea is how far the motte is from the bailey; I've never seen another site where the motte seems off by itself so markedly.

More self catering near Skipsea Castle >>