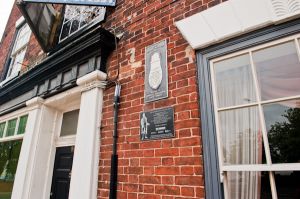 A large market town, billing itself as 'The Heart of the Yorkshire Wolds'. Market Weighton makes much of its most famous native, William 'Giant' Bradley. Bradley was born in 1787 and grew to 7'9" in height. He made a living exhibiting himself at fairs around the country.

His monument can be seen inside All Saints church, next to a memorial to another illustrious 18th-century native, Sarah Andrews. Andrews, born in 1774, married General Francisco de Miranda (1750-1816), who fought beside Simon Bolivar in his ultimately successful effort to free South America from Spanish rule.

But back to Giant Bradley; his statue stands in the market square, just a few steps from his house on York Road. Look carefully at the outside of the house and you can see that the two central windows on the upper floors are not real; they are painted.

The story goes that Bradley, a typically frugal Yorkshireman, did not want to pay extra window tax, so he had the windows painted on the outside of the building. As for the house, it was specially built for Bradley, with extra high rooms and doorways.

The Yorkshire Wolds Way National Trail passes close to Market Weighton, on its way from the Humber near Hull, to the coast near Bridlington. 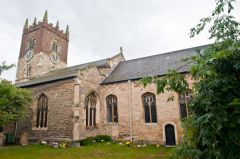 More self catering near Market Weighton >>