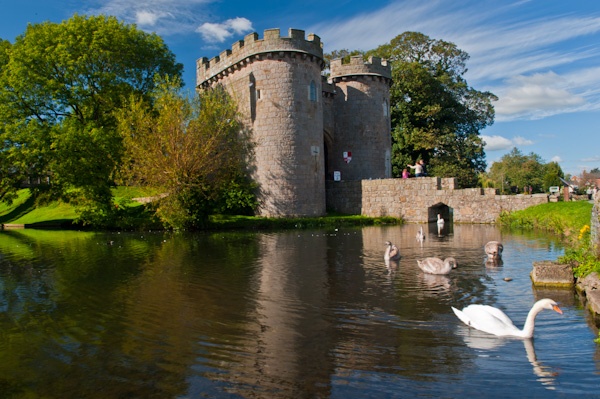 Swans in the moat of Whittington Castle

Whittington Castle is, as far as we know, the only castle in Britain that is owned and operated by its local community. The first castle at Whittington dates to 1090-1100, though there is evidence that a Saxon settlement existed close by the site. In 1138 the castle was fortified by Empress Maud against King Stephen. The rectangular tower keep atop the motte may date to this period.

The castle was the subject of a legal dispute in the late 12th century as Fulk Fitz-Warren won a court battle for ownership, though it seems that he never took possession. It was left to Fulk's son, Fulk III, to seize the castle in 1204.

Around 1223 Whittington was captured by Llewelyn ab Iorwerth. Around the same period, the inner bailey and outer gatehouses were built, and the water defences improved. In 1265 Llewelyn ap Gruffudd was granted lordship of Whittington, but the castle almost immediately passed to Fulk Fitz-Warren V.

In the mid 14th century Fulk VI and his wife, Eleanor, established a pleasure garden at Whittington, landscaped the grounds, and built comfortable apartments. But the castle gradually fell into disrepair in the late 14th century, so that by 1392 it was declared to be 'utterly in ruins'.

In 1638 the castle passed to the Lloyd family of Aston Hall. The Lloyd's retained ownership into the 20th century.

The most striking feature of the castle is the large gatehouse towers, joined to the High Street by a footbridge across a broad moat. Attached to the north gatehouse tower is a lovely 17th-century cottage (Grade I listed). Within the Inner Bailey are remains of a great hall, stone keep, castle well, and a dovecote. The entire site is surrounded by extensive earthworks.

One fascinating feature is a medieval garden site that has been recently identified. As of this writing, plans are underway to recreate this garden with plants that would have been used in the medieval period.

Separated by a deep ditch from the main castle is a large motte. This was thought to be the first castle site, but historians now suggest that it was a purpose-built observation mound, or viewing platform, used for admiring the garden below.

Our Verdict
It is quite amazing that Whittington Castle is not better known; it is every bit as impressive as many more popular medieval castles, and when you see the wonderful sight of the imposing gatehouse reflected in the castle moat you'll realise what I mean!

More self catering near Whittington Castle >>