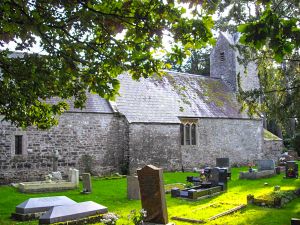 Llansannor, St Senwyr Church
The only church in Wales dedicated to St Senwyr. A place of worship since the 12th century, the church has a saddleback roof, 16th century porch, and a medieval wall painting.

The first written record of a church at Llansanor comes from 1180, but the current building is Early English in style and probably dates to the 13th century. St Senwyr's began as a chapel before becoming a fully-fledged church, and it stands within the grounds of Llansannor Court, home of the Gwynne family since the 16th century.

Perhaps the most impressive feature is a late 15th century timber roof of 4 bays. There is a very simple 14th century tub font and the door is dated 1674.

Aside from the roof the main historic interest inside the church is an extremely well=preserved effigy of a late 14th century knight in full armour in the chancel. There are more good monuments in the nave, dating to the 18th century, as well as fragments of wall paintings.

On the north wall you can make out a fleur-de-lys,, and on the south wall is what appears to be a haloed figure. This suggests that the entire nave interior was once adorned with a series of themed paintings, which were subsequently covered over with whitewash.

In the churchyard is a cross set into a medieval base. The cross itself is probably recent, but the base itself must be at least 500 years old. St Senwyr's church and the adjoining manor house were used as a setting for the 2007 Dr who episode entitled The Unicorn and The Wasp.