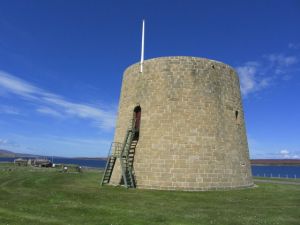 The garrison barracks have been recreated to give an impression of what life was like for soldiers stationed here. The Martello Tower looks across Longhope Sound to Orkney Mainland and Scapa Flow.

The battery and tower were constructed in 1813-14, when the Napoleonic Wars were in full swing. American and French vessels were preying on ships sailing north around Scotland an through Pentland Firth (between Orkney and the mainland). The British needed a military presence here to discourage the heavy shipping losses.

The battery was built first, followed shortly by a pair of Martello Towers. One of these, dubbed Crockness, is on the north side of the sound as is in private hands. The other, Hackness, stands 200 metres from the battery.

It seems that the towers never saw military action during the Napoleonic Wars. When the threat of war emerged again in 1866 they were strengthened once more, with new guns and barracks. Once again the measures proved unnecessary, and by 1883 the site was manned by only 2 artillerymen. It was unused during the dramatic World War II events at Scapa Flow, across the sound.

The Martello Towers at Hackness and Crockness were two of only three such round artillery towers ever built in Scotland (the other was built to guard the port of Leith, Edinburgh).

Access to the tower was by a ladder leading to the first-floor barracks, with space for 14 men. Above the barracks was a gun emplacement, while on the ground floor was the powder magazine and storage area.

Nearby accommodation is calculated 'as the crow flies' from Hackness Martello Tower. 'Nearest' may involve a long drive up and down glens or, if you are near the coast, may include a ferry ride! Please check the property map to make sure the location is right for you.