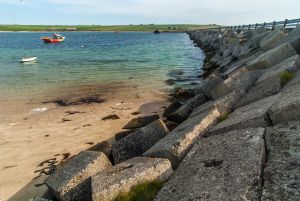 One of the great feats of civil engineering in history, the Churchill Barriers are a series of causeways linking South Ronaldsay to Orkney Mainland. They were erected during World War II to prevent the passage of German submarines into Scapa Flow, used as a naval base by the British.

The British Royal Navy used the sheltered natural harbour of Scapa Flow throughout WWI and in the years leading up to the Second World War. The anchorage was defended by blockships (ships intentionally sunk to block the passage between islands) and by submarine nets.

One of the ships sheltering at Scapa Flow immediately after the declaration of war was the Royal Oak, a Revenge class battleship built in 1914. On the night of the 13 October 1940, the German submarine U-47 made a daring raid into Scapa Flow, sneaking through the defences, and sank the Royal Oak as it lay at anchor.

Of the 1234 crew, 833 were killed or died later of injuries. The sinking did not damage the Navy's superior numbers in the North Atlantic, but it seriously affected morale on both sides in the initial months of the war.

The rusting hulk of the Royal Oak still lies in 100 feet of water, almost completely upside down. It is a designated war grave and its location is marked by a buoy. Each year navy divers place a white ensign on the ship's stern as a mark of respect for the ship and her crew.

To prevent a repeat of the attack, the British decided on a bold plan; to erect a series of four permanent barriers between the islands, effectively blocking any passage. Winston Churchill visited Orkney within a month of the attack and ordered the massive project to be started. Not surprisingly, the Barrier project was named after the Prime Minister. 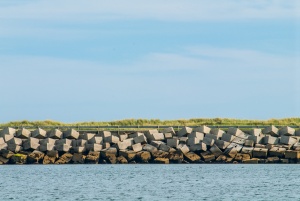 The Barriers from a distance

Overhead cableways were set up, and 250,000 tons of rock dumped to form a base. The base of rocks was then topped by 66,000 concrete blocks, cut to 5 and 10-ton sizes. The 5-ton blocks were laid directly on the base, and the 10-ton blocks arranged randomly along the sloping sides, to break up wave patterns. Rock was quarried locally and the concrete was cast on Orkney and transported by railways to the site.

Most of the labour to build the Barriers was provided by Italian POWs, with 2 camps living on Burray and one camp on Lamb Holm. According to the terms of the Geneva Convention, to which Britain was a signatory, using POW labour for war purposes was prohibited. The British chose to call the Barriers ‘improvements to communications’ for the south Orkney islands, which fooled no one.

As it happens, though, the 'spin' was essentially correct, for though the defences were only finished after the war was over, their lasting legacy is as a means of joining the 5 islands, and allowing visitors landing at St Margaret's Hope to drive comfortably to Orkney Mainland. Over the decades the Barriers have allowed sand to build up on the eastern side, creating a lovely, golden beach linking Burray and South Ronaldsay.

During the little time off work, the Italians created the astonishing Italian Chapel, using whatever scrap materials they could find. Work on the Barriers began in May 1940 and was complete by September 1944. It was formally opened by the First Lord of the Admiralty four days after the war in Europe officially ended.

There are 4 causeways in total, linking Orkney Mainland to the smaller islands of Glimps Holm, Burray, and South Ronaldsay. The causeways contain a total of half a million cubic yards of rock and over 300,000 tons of concrete. They stretch 1.5 miles in length.

It is quite amazing to stand on the curving barriers and realise just how much effort went into their creation. If you look out into the sheltered water of the Flow you can see rusted bits of sunken ships poking above the surface of the water. It is a sobering sight, even more so when you realise that so many hundreds of sailors lost their lives in this peaceful spot. 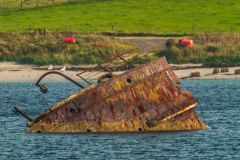 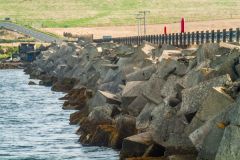 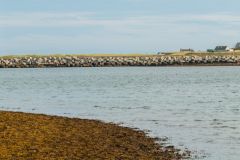 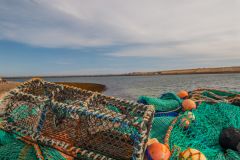 Nearby accommodation is calculated 'as the crow flies' from Churchill Barriers. 'Nearest' may involve a long drive up and down glens or, if you are near the coast, may include a ferry ride! Please check the property map to make sure the location is right for you.

More self catering near Churchill Barriers >>