As for Duncansby Head, there are two main attractions (aside from the reward of standing on the most northeasterly point of the Scottish mainland). First, there is the lighthouse, built by one of the famed Stevenson family of engineers, and second, there are the dramatic sea stacks known as the Stacks of Duncansby, reached by a walk along the clifftops from the lighthouse car park. 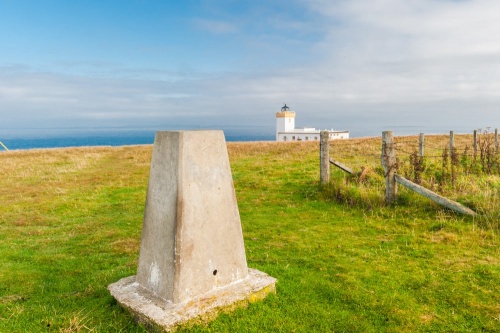 The OS trig point and lighthouse

Duncansby looks north over the Pentland Firth to the Orkneys. The Firth is a perilous passage for maritime traffic, and its dangers earned it the moniker 'Hell's mouth'. The currents of the North Atlantic Ocean and the North Sea set up dramatic and dangerous tidal races and eddies that can reach a speed of up to 10 knots in places.

To help ships navigate the treacherous waters, Duncansby Head Lighthouse was built in 1924, replacing a WWI foghorn. The engineer behind the lighthouse was David Alan Stevenson, whose family designed and built many of Scotland most famous lighthouses. The Stevensons' most famous member, however, was not an engineer, but a writer; Robert Louis Stevenson. 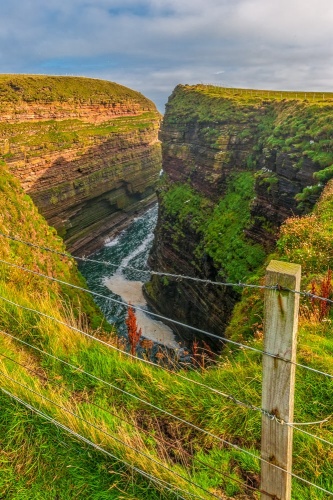 As for the lighthouse, it is a squat, square structure of concrete, painted white, with a balconied tower that reaches 11m high (roughly 25 feet). Its signal is a white light, flashing every 12 seconds and visible 21 nautical miles out to sea. It stands atop an almost sheer cliff, with a drop of 67m (roughly 148 feet) to the water below.

The lighthouse was bombed by German planes during WWII, but no damage was caused and no one was injured in the attack. A radar beacon (racon) was installed in 1968 but this has since been replaced by a low-power self-operating version.

The lighthouse became fully automated in 1997. There is no public access to the building, but you can easily walk right up to it. It is a bit unusual in that the lighthouse was built in a dip, so that it isn't immediately visible until you get close to it. 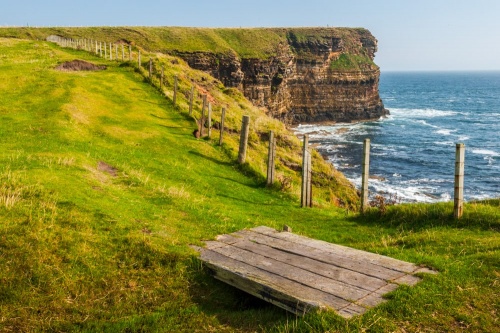 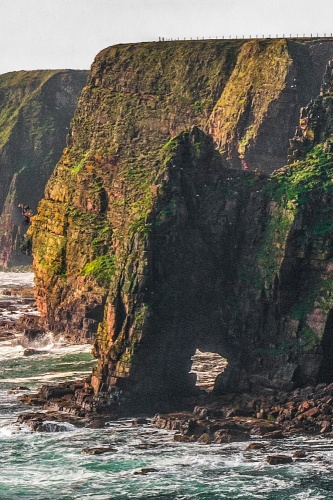 Aside from seeing the lighthouse, the real reason for a trip to Duncansby Head is to visit the sea stacks, located a little less than a mile south of the lighthouse. The going is relatively flat and takes in some of the most stunning clifftop scenery anywhere in Britain.

As you head south from the lighthouse along the obvious and well-trodden path, you first come to the Geo of Sclaites, and narrow crevice that splits the rocky cliffs like they had been cleaved with a giant knife. The Geo is home to a colony of seagulls, whose raucous cries fill the air. 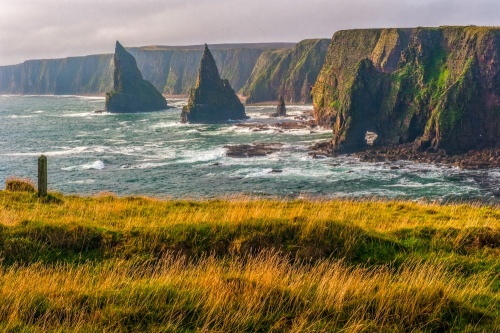 The Stacks of Duncansby in the distance

South of the Geo of Sclaites to come to a natural sea arch known as Thirle Door, where the action of the wind and waves has carved a hole through solid rock.

And at last you reach the Stacks of Duncansby, a pair of absurdly jagged, knife-edged pinnacles of rock jutting upwards from the sea. The sea stacks are roughly pyramidal in shape and come to sharp points. You can get great photos of the stacks from almost any angle; just be aware that the sea mist can roll in very, very quickly. You can be bathed in sunlight one minute and shrouded in mist the next. Come at sunset when the sea stacks are light by the golden glow of the sun through the mist. Magic! 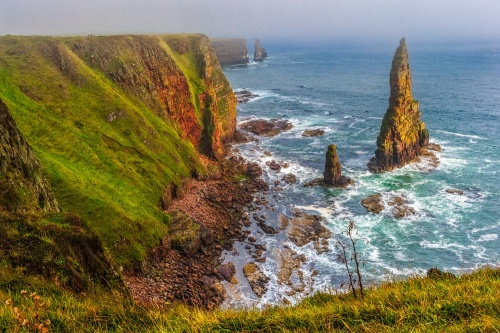 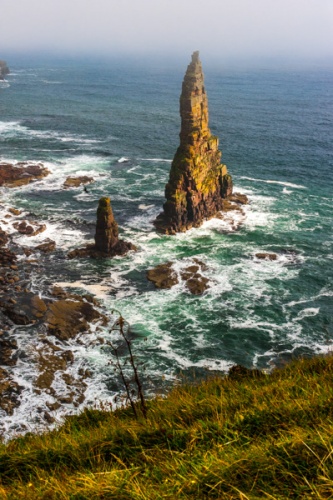 Mist rolling in on a sea stack

Getting to Duncansby Head is relatively straightforward. The road is signposted off the A99 in John o' Groats village, opposite the post office. Just follow the lane to the end and you will come to a free parking area in front of the lighthouse.

Nearby accommodation is calculated 'as the crow flies' from Duncansby Head Lighthouse and Sea Stacks. 'Nearest' may involve a long drive up and down glens or, if you are near the coast, may include a ferry ride! Please check the property map to make sure the location is right for you.

More self catering near Duncansby Head