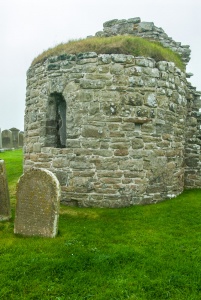 The only surviving medieval round church in Scotland, dating from the 12th century.

We don't know for certain, but the best guess for the foundation of Orphir Church is the late 12th or early 13th century. Tradition gives Earl Hakon as the founder, and the church is dedicated to St Nicholas.

Why was it built here?

In the 12th century, Orphir was an administrative centre for the powerful Orkney earls. Beside the church are the ruins of Earl's Bu, a hall used by the earls.

Why is it round?

Round churches are unusual in Britain, but those that we know of were probably created after the return of crusading knights from the Holy Land. The Church of the Holy Sepulchre in Jerusalem is round, and this probably influenced the British knights to emulate the design on their return.

Taken on its own, Orphir Round Church is perhaps a bit disappointing. There is not much of the church remaining beyond the rounded structure seen in these photos. There are foundation walls in the turf which show the overall structure of the church.

However, beside the church is the remains of the Norse hall of Earl's Bu, and a few yards away is the Orkneyinga centre, which tells the tale of the Orkneyinga Saga and the Norse civilization here on Orkney. Taken together these three attractions definitely rate a visit, and the location on the shore of Scapa Flow is beautiful as well. 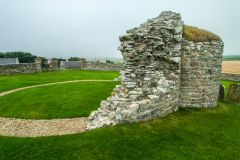 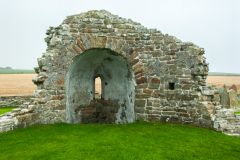 Nearby accommodation is calculated 'as the crow flies' from Orphir Round Church. 'Nearest' may involve a long drive up and down glens or, if you are near the coast, may include a ferry ride! Please check the property map to make sure the location is right for you.

More self catering near Orphir

More bed and breakfasts near Orphir