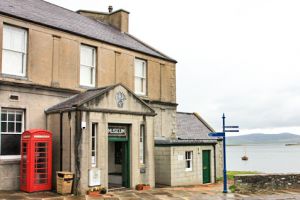 Stromness Museum
This museum of natural history and maritime heritage includes displays on whaling, fishing, the Hudson Bay Company and the German Fleet in Scapa Flow.

The Stromness Museum was established in 1837 by the island's Natural History Society, and natural history is still one of its main focusses. The museum is housed in an 1858 building on Alfred Street. near the ferry port.

The collections are divided into 8 main themes. First and foremost is the natural history of Orkney, including shell collections, birds and eggs, seaweeds, fossils, rock collections, butterflies and insects, and native mammals.

Another major theme is maritime history, with ship and boat models, boat-building tools and equipment, original Orkney boats, and a large collection of Hudson Bay Company artefacts, from Eskimo objects to Company snow-shoes.

There is a collection of objects related to the Burgh of Stromness, from old photos to clothing, Old Orkney whiskey to Town Council memorabilia, and ephemera of the Independent Order of Rechabites, a 19th-century Temperance movement organisation.

There are ethnography exhibits from around the world, including objects brought back from Africa by explorer William Balfour Baikie, and several objects left behind when Captain Cook's ships stopped here in 1780.

So objects found at Skara Brae and other archaeological sites around Orkney, agricultural equipment, maps and charts - some dating as far back as the 17th century - and coins found locally.

Nearby accommodation is calculated 'as the crow flies' from Stromness Museum. 'Nearest' may involve a long drive up and down glens or, if you are near the coast, may include a ferry ride! Please check the property map to make sure the location is right for you.

More self catering near Stromness Museum >>

The Rhiconich Hotel - 71 miles
Lairg, Highlands and Islands
Stay from: £48.00