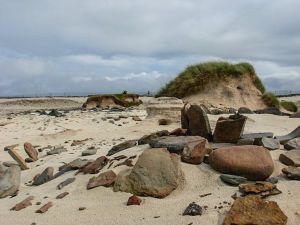 Links of Noltland
The Links of Noltland is an area of sand dunes at the north end of Westray, within which are a rich array of prehistoric sites. The sand has helped to preserve the archaeological remains, which are only now being carefully excavated and catalogued.

The first concerted archaeological digs began in the 1980s. These digs found the remains of a Neolithic building, now cared for by Historic Scotland. But much better was to follow; in 2008 a small figurine was discovered. This figurine was labelled The Westray Wife and is thought to be the earliest depiction of a human being in Scotland.

The lozenge-shaped stone is carved with eyes, heavy eyebrows, an oblong nose, and hatch marks which may represent clothing. Since the discovery of the Westray Wife, a further two figures have been found, along with beads, tools, and pottery.

So far it looks like the site was occupied on several occasions, spanning the Neolithic and Bronze Ages. The first occupation came from the period 2500-3000 BC when the figurine was made. A structure was found dating to about 2000 BC, then in 2009, a large building was unearthed which appears to have been used communally, like a village hall. This large building was on a rise overlooking the village below, and was 66 feet wide, with walls almost 10 feet thick.

Finds suggest that the inhabitants of the Links of Noltland farmed barley and other grains, kept sheep and cattle, and ate venison.

Up to date information on the ongoing archaeological digs at Noltland, including access availability, can be found on the Westray Heritage website. Nearby is Noltland Castle, a 16th-century tower house, also in the care of Historic Scotland.

Nearest Accommodation to Links of Noltland:

Nearby accommodation is calculated 'as the crow flies' from Links of Noltland. 'Nearest' may involve a long drive up and down glens or, if you are near the coast, may include a ferry ride! Please check the property map to make sure the location is right for you.

More self catering near Links of Noltland >>

More Hotels near Links of Noltland >>

More bed and breakfasts near Links of Noltland >>