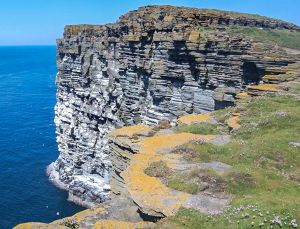 The reserve is at its best in summer, when paths along the cliff tops are ringed with wildflowers. Keep your eyes peeled for porpoises and orcas in the sea below, especially on clear days in summer. From April to July many of the birds nest on the ground, so care is needed to avoid alarming the nesting birds unnecessarily.

In spring and early summer you stand the best chance of seeing puffins. This time of year is also best for kittiwakes, which can be seen in their thousands tucked into narrow ledges on the cliffs.

Around the base of the cliffs you can see gannets and another of the 'star species', as the RSPB calls them, are guillemots, Another star species is the Arctic tern, which migrates to Orkney from as far as Antarctica. The terns arrive at the beginning of May to begin their breeding season. Winter is the best time to spot fulmars and rock pipits, as well as grey seals and Common seals. Autumn is best for wheatears, ringed plovers, and great skua.

The name 'Noup' comes from 'gnui', a headland area. On the top of the cliffs stands the Noup Head lighthouse, designed in 1898 by David Stevenson for the Northern Lighthouse Board. Born into the famous Stevenson engineering family, David Stevenson designed 26 lighthouses, most in Scotland. He was a cousin of the novelist Robert Louis Stenson. The lighthouse stands 79 metres above sea level and was the first in Scotland to have a lens suspended in mercury.

There is a nature trail following the cliffs south, linking with the West Westray Walk. The trail is 1.5 miles long and is unsuitable for wheelchairs.

There is a small parking area at the lighthouse with room for 5 cars.

The best way to get to Westray is by ferry from Kirkwall, or if you are in a hurry and have flush pockets, there is an air service, also from Kirkwall. 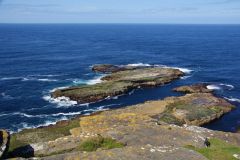 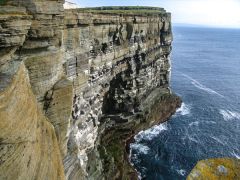 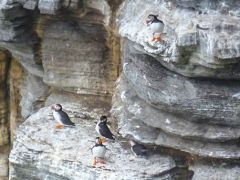 Nearby accommodation is calculated 'as the crow flies' from Noup Cliffs RSPB Nature Reserve. 'Nearest' may involve a long drive up and down glens or, if you are near the coast, may include a ferry ride! Please check the property map to make sure the location is right for you.