HERITAGE HIGHLIGHTS:   71 gun holes, most of any Scottish castle 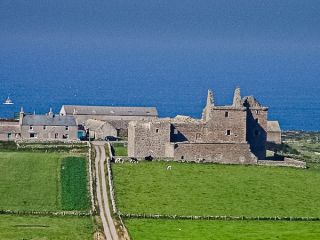 Noltland Castle
Noltland Castle is a ruined 16th-century Z-plan tower house near Pierowall, Westray. The tower house was built by the Balfour family and features a large number of gun loops and an impressive staircase.
History
In 1560 the Bishop of Orkney granted estates on the island of Westray to his brother-in-law, Gilbert Balfour of Fife, Master of the Household to Mary, Queen of Scots. Balfour was also named Constable of Kirkwall Castle and Sheriff of Orkney.

In today's police parlance, Balfour 'had previous'. He had taken part in the notorious murder of Cardinal Beaton in 1546. He would also go on to help plan the murder Lord Darnley, Mary's husband, in 1567.

Perhaps Noltland is an indication of a man with an uneasy conscience and many enemies, for its distinguishing feature is the large number of gun holes that pierce its walls. There are 71 gun holes in total, by far the largest number of any Scottish castle. These gun holes help give Noltland the aura of a place to hide rather than a luxurious residence.

The inscription over the main entrance indicates something of Balfour's character. It is a verse from Exodus, and reads, 'When I see blood I will pass over you in the night'. A cheerless thought for a cheerless man!

When Mary, Queen of Scots was arrested following Lord Darnley's death in 1567, Balfour retreated to the relative safety of Noltland to wait out the political storm. He did eventually return to fight on Mary's behalf, but when her bid to regain the Scottish throne failed, Balfour fled to Europe. He died in 1576 while fighting as a mercenary in Sweden.

The castle was seized by the rapacious Earl of Orkney, Patrick Stewart (Black Patie), but handed back to the Balfours after Stewart's arrest for treason. The castle was held by supporters of the Marquis of Montrose in 1650, but a group of local Covenanters captured Noltland and burned it. The castle was damaged by fire again in 1746, and finally abandoned shortly after. It was allowed to fall into a ruinous state and was eventually given into state care by the Balfour family.

The castle complex consists of a walled enclosure, with a 4-storey high Z-plan tower block on one side of a courtyard. The central tower is oblong, with square towers at opposing corners. The only light to the lower two storeys is admitted through gunholes, so it must have been a dark and cheerless place. There are storage chambers and a kitchen at ground level, and living quarters above. In the 17th century, a low L-plan block was added.

The most lavish part of the castle is the very wide spiral stair, embellished with carvings, and a central newel capped with an elegant capital. The stair may have been added by Patrick Stewart during his brief tenure at Noltland. If so, that makes it seem even more likely that the original castle as built by Balfour was a dark and forbidding place.

Noltland is 1 mile from Pierowall on the island of Westray, which can be reached by ferry from Kirkwall. It is in the care of Historic Scotland and is open at any reasonable time.

Nearby accommodation is calculated 'as the crow flies' from Noltland Castle. 'Nearest' may involve a long drive up and down glens or, if you are near the coast, may include a ferry ride! Please check the property map to make sure the location is right for you.

More self catering near Noltland Castle >>