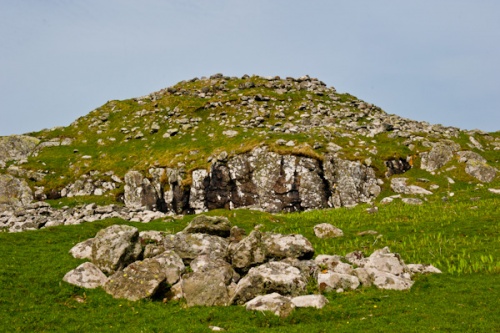 When the dun was excavated in 1953 and 1955 finds showed occupation from the 4th to the 7th century. Objects found on the site include a bone comb, pottery, bone dice, pins, querns, and other stone tools. Finds from Dun Cuier are now housed in the National Museum of Antiquities of Scotland.

The dun measures just under 30 feet internally, with very thick walls up to 16 feet wide, standing only 4-5 feet high.

It is very easy to access the dun, though the hill is steep in places. Park at the Cuier cemetery, go through the farm gate opposite and take the trail indicated by painted posts up the hillside.

The trail winds a bit to go around the hillside, so if you are impatient and fit, just head straight up the hill in front of you until the broch comes into view a few hundred yards up. It is well worth the exertion to climb up the hill to the dun, as the views are exhilarating. 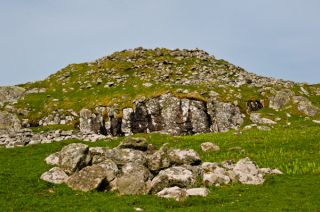 Nearby accommodation is calculated 'as the crow flies' from Dun Cuier. 'Nearest' may involve a long drive up and down glens or, if you are near the coast, may include a ferry ride! Please check the property map to make sure the location is right for you.

More self catering near Dun Cuier >>