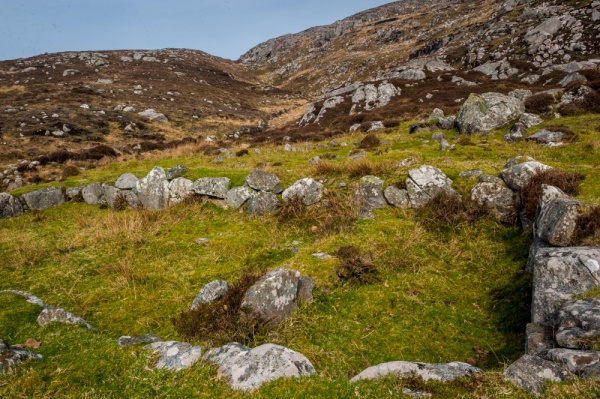 Marked as Gortein, Allt Chrysal or Allt Chrisal on OS maps, but known locally as Allt Easdail, this fascinating complex of historic buildings stands on the southern slope of Ben Tangaval, looking across to Vatersay island. Here you can find evidence of occupation spanning 5,600 years, from the Neolithic period to the 18th century.

The site was undiscovered until 1998 when archaeological surveys in preparation for the building of the Vatersay causeway revealed a rich complex of buildings on the slope of the hill.

Six years of investigation by a team of archaeologists from Sheffield University uncovered evidence of habitation ranging from circular huts, an Iron Age house, a prehistoric burial cairn, and a late 18th-century blackhouse. The earliest dwelling here is actually underneath the blackhouse, where Neolithic settlers built a platform about 3,600 years ago, to act as a foundation for houses. 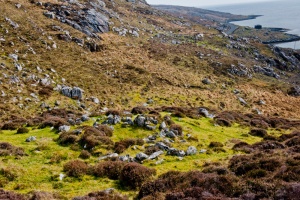 Looking down on the
settlement from above

Part of the platform was created using large, flat stones, which were later used for drying skins. It was obviously a well-made platform, for over 5000 years later it was reused by the builders of the blackhouse. Neolithic finds here included over 560 pottery pots.

About 2000 BCE a circular hut was built further up the hillside, near a second, smaller hut, possibly used for storage. There is a stone hearth by the door and a stone-built storage box near the rear of the hut. Inside the box, a decorated pottery beaker was discovered.

There was a gap in settlement until about 2000 years ago when a large stone roundhouse was built to the south-west of the stream.

This roundhouse was later rebuilt as a wheelhouse (with the interior divided by stone partition walls, resembling spokes of a wheel). This is the most impressive dwelling at Allt Chrysal, measuring some 9 metres across. Spindle whorls used for spinning wool were found inside the wheelhouse.

There are very good information signs on the site explaining the history, and how the site developed. Unfortunately, when I visited there was no apparent sign indicating just where the site was to be found; I drove past it before realising I'd gone too far. In retrospect it ought to be simple; if you get to the causeway over to Vatersay, you've gone too far.

Allt Chrysal is on the uphill side of the road 100 metres or so in the direction of Castlebay, and there is a wide layby where you can park. Now about that sign ... 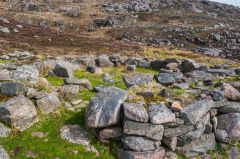 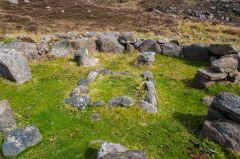 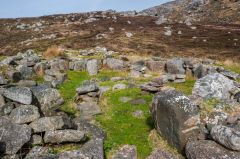 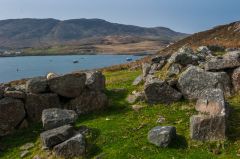 About Allt Chrysal Ancient Settlement
Address: Castlebay, Barra, Western Isles, Scotland
Attraction Type: Prehistoric Site
Location: On the minor road leading from Castlebay to Vatersay, just before the causeway. There is a small layby by the side of the road.
Location map
OS: NL641977
Photo Credit: David Ross and Britain Express

Nearby accommodation is calculated 'as the crow flies' from Allt Chrysal Ancient Settlement. 'Nearest' may involve a long drive up and down glens or, if you are near the coast, may include a ferry ride! Please check the property map to make sure the location is right for you.

Loch Mor, Glendale, Isle of Skye Prints
PUT THE BEST OF BRITAIN ON YOUR WALL