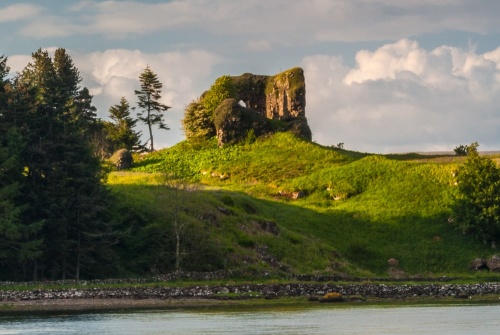 Aros Castle, also known as Dounarwyse Castle, is a ruined 13th-century stronghold on the rocky estuary of the Aros River, looking across the Sound of Mull to the Scottish mainland.

The ruins consist of a roofless hall house perched on a rocky headland and defended on the landward side by a ditch and stone wall. 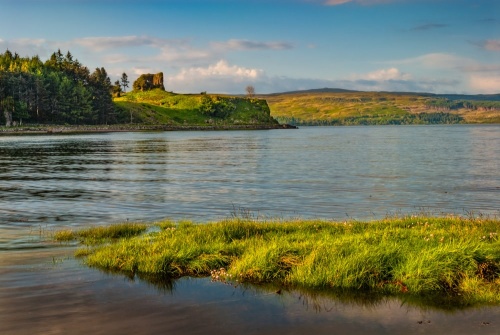 Aros Castle across the river estuary

We don't know who built Aros Castle, or when it was built. We do know that it was begun in the 13th century by one of the MacDougalls of Lorn. The first written record of the castle isn't until the 14th century.

The MacDougalls backed John Balliol in his struggle for the throne with Robert Bruce. When Bruce emerged victorious and took the Crown of Scotland he seized the MacDougall estates and transferred Aros Castle to the MacDonalds.

The Lords of the Isles were virtual kings in western Scotland, but in 1493 King James IV of Scotland launched a major offensive to break the MacDonalds' power and wrest control of Argyll from them. The king seized MacDonald lands and gave Aros to the MacLeans, whose seat of power was further south at Duart Castle.

In 1674 Archibald Campbell, the 9th Earl of Argyll, briefly garrisoned Aros Castle as part of his bitter dispute with the MacLeans. Whether Argyll's men damaged the castle or it had been simply allowed to decay, it was recorded as ruinous in 1688.

The Campbells eventually broke the power of the MacLeans and Aros passed into Campbell hands, though it seems that they never repaired the castle and the lands were rented to a succession of tacksman farmers. 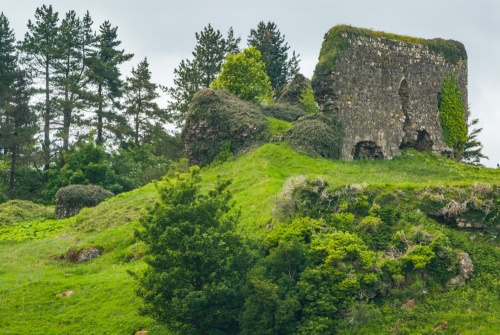 Despite its name, Aros Castle is not a castle as most people would think of the term, but a fortified hall house. The house stands on a rocky promontory on the north bank of the River Aros where it empties into the Sound of Mull. It is defended on the landward side by a ditch and bank.

The house stands within a curtain wall enclosure that forms a roughly square bailey, with a causewayed entrance across the northern section of the ditch. The house itself is built on an oblong plan on a north-south axis, and measures 25.3m x 12.5m. The walls vary in thickness from 1.7m to 3m. The house stood two storeys high, with an attic, though the walls now only reach 10m in places.

Only short sections of the curtain wall remain, and you can see the remains of several smaller stone buildings inside the bailey.

There are no facilities at Aros Castle, but the castle and grounds are open to explore. Just take care amid the ruins.

Nearby accommodation is calculated 'as the crow flies' from Aros Castle. 'Nearest' may involve a long drive up and down glens or, if you are near the coast, may include a ferry ride! Please check the property map to make sure the location is right for you.

Self Catering near Salen