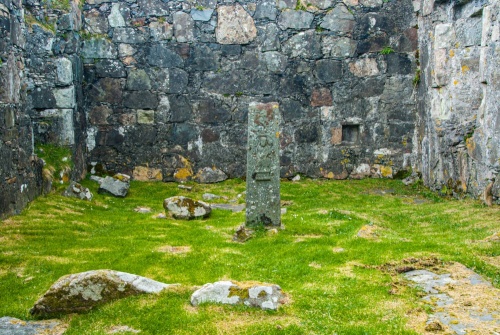 Just off the coastal road linking Salen and Craignure on the east coast of Mull stand the ruins of a late 12th-century chapel at Pennygown. The chapel ruins are within an old burial ground, bounded by a stone wall.

The chapel is well worth visiting for two beautifully-carved 17th-century grave slabs set into the ground outside the chapel wall and a Celtic cross-shaft that stands inside the roofless ruin.

It isn't clear to whom the chapel was dedicated, or indeed, if it was ever finished. We do know that it was built to serve the northern part of Torosay parish and that it was shown as 'an old kirk' on a 1787 parish map. 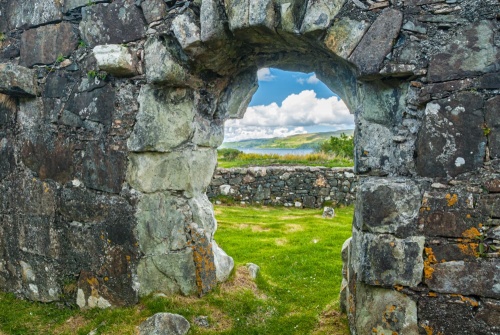 Entrance is by a round-headed doorway in the north wall and there are two opposing windows at the eastern end of each wall and a third window in the west wall. Projecting corbels in the side walls suggest that a west gallery was inserted in the late-medieval period. 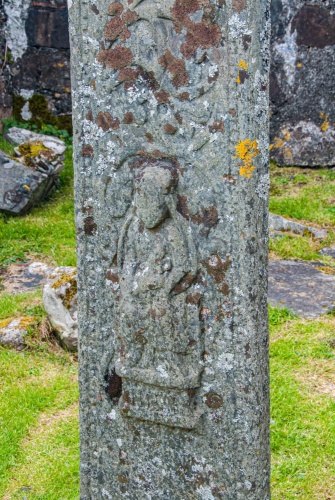 In the centre of the chapel stands a beautifully carved Celtic cross shaft on a modern base. The front face of the shaft is carved with a Crucifixion scene above decorative foliage and a griffin. Below this is a galley under sail. The reverse of the cross shaft is carved with a Virgin and Child in high relief. The shaft is thought to have been carved sometime between 1500-1560. 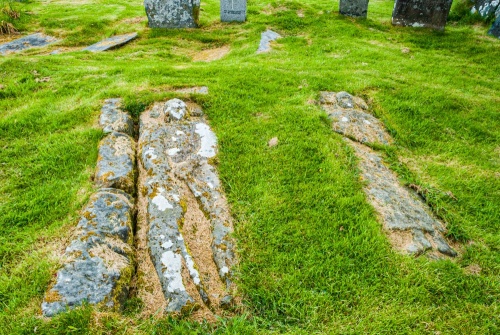 Outside the south wall of the chapel are two grave slabs set into the turf. The grave slabs commemorate an unknown knight and his wife. The knight's effigy depicts a helmeted man, his right hand on a sword pommel and his left hand holding a dirk. His head rests on a pillow. The carved epitaph tells us that the man is Allan, the son of Hector, but gives no other details.

The knight's lady is shown wearing a long gown with a headdress. Her hands are crossed on her breast.

Three legends cling to Pennygown Chapel. One story says that when the chapel was being built, workmen would arrive at the site each day and find that the work they had done the previous day had been undone. As a result, the building was never finished. 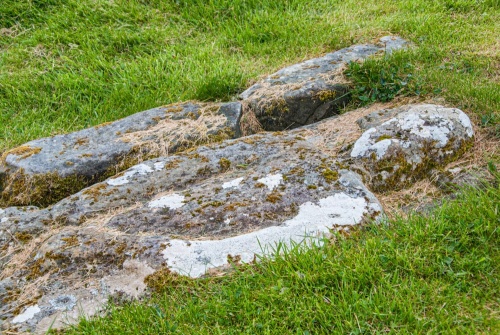 The second legend also says that the chapel was never completed, in this case because three lairds acting as the chapel patron each died before the project was finished.

The third legend says that the chapel was home to friendly faeries who would grant small wishes to local people. One resident went too far and left a fragment of wood, asking for the faeries to transform it into a ship's mast. The faeries, perhaps put out by the greedy demand, left the chapel and disappeared.

Whether there have ever been faeries at Pennygown I'll leave it to you to decide, but this is a magical place, well worth visiting to see the carved grave slabs and the Celtic cross. 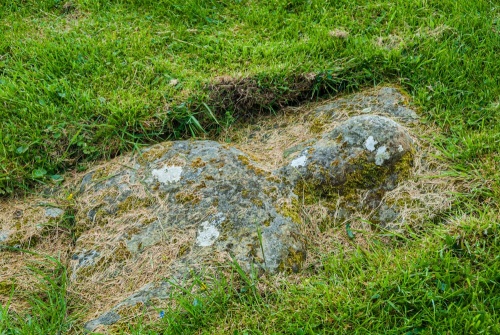 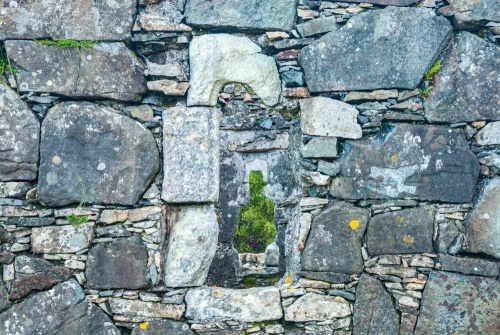 Pennygown Chapel stands on the seaward side of the A849 just east of the airstrip and hotel and about two miles east of Salen. There is a gravelled car park outside the burial ground, which is easily visible on the north side of the road as you pass through Pennygown.

Our thanks to the excellent Mull Historical and Archaeological Society website for the details of traditional legends associated with Pennygown Chapel.

Nearby accommodation is calculated 'as the crow flies' from Pennygown Chapel. 'Nearest' may involve a long drive up and down glens or, if you are near the coast, may include a ferry ride! Please check the property map to make sure the location is right for you.

Self Catering near Salen