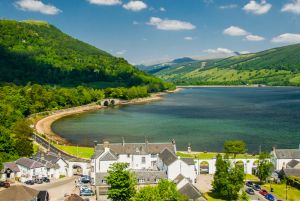 Loch Fyne is a huge sea loch on the west coast of Scotland that reaches from the Argyll mountains to the sea north of Arran. The loch stretches 40 miles from the Sound of Bute, making it the longest sea loch in the country.

Loch Fyne has long been a centre for oyster and herring-fishing, with the Loch Fyne Oyster brand and restaurant chain established across Britain. It is popular for fishing and diving, but just as many people are drawn to this beautiful area by the range of historic tourist attractions. Here are some of our favourites:

The most visited historic attraction on Loch Fyne is this beautiful stately home, the seat of Clan Campbell. The castle was designed by Sir John Vanbrugh, the architect of Blenheim Palace, for the 2nd Duke of Argyll on the site of a 15th-century clan stronghold. The superb interiors are largely the creation of William Adam and his son Robert and include stunning plasterwork ceilings and staterooms filled with fine art and furniture.

On the shore of the loch near Kilfinan stands the scanty remains of a fortress once owned by Clan Ewen of Otter. The first structure we know of was a medieval dun, or fortified tower. The dun was replaced by a promontory fort, and then by a simple homestead. In 1493 the land was granted to Clan Campbell when the last chief died without an heir. Excavations on the site discovered a 12th-century crucifix. 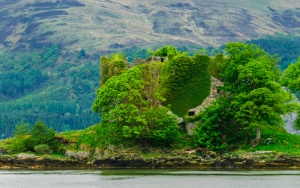 This ruined 15th-century castle stands in a beautifully picturesque location near the head of the loch, on the eastern shore. It was built for Clan MacLachlan but was heavily damaged in 1746 when it was attacked by government soldiers. The clan built a new house to the north-east of the medieval castle, leaving it to fall into decay and become an ivy-covered, romantic ruin.

A stone's throw to the south-west of the castle stands Kilmorie Chapel, the traditional burial place for the chiefs of Clan Maclachlan and one of the very few medieval churches remaining in the west of Scotland.

High on a hill overlooking Tarbert harbour stand the ruins of this striking medieval fortress, associated with King Robert Bruce. We do not know when the first castle was erected, but we do know that in 1325 Bruce repaired and extended an existing castle. In 1494 James IV rebuilt Bruce's castle and later bestowed it on the chief of Clan Campbell. In the early 16th century, it was the base for a pirate named Alan-nan-Sop, who raided throughout Argyll and across to Ireland. It later passed to the McAlister family, but by the 18th century, it was allowed to fall into ruin.

At the tip of the loch, set in 25 acres of woodland, is a superb garden surrounding Ardkinglas manor house. The garden is known for its collection of Champion conifers, including a Grand Fir that reaches 203 feet in height. Another highlight is the Ardkinglas Silver Fir, named as one of Britain's top 50 trees. Trails lead through lush woodland, following the Kinglas river, winding through a pinetum, and past small lochs.

This poignant open-air folklife museum tells the story of Auchindran village, once a thriving community before the Clearances put more emphasis on raising sheep than farming. The village was settled as early as 1533 but the last resident left in 1967. Today Auchindrain is preserved as a museum of traditional life.

The National Trust for Scotland describes Crarae as the best example of a Himalayan-style garden in Britain. This colourful garden is laid out along a wooded gorge, with waterfalls and cliffs forming part of the garden design. Lush and richly coloured with rhododendrons, camellias azaleas, and magnolias in season. An unexpected garden feature is a Neolithic chambered cairn, built around 2500 BC. 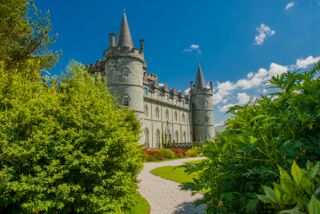 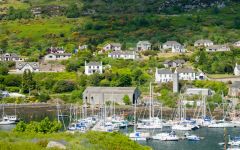 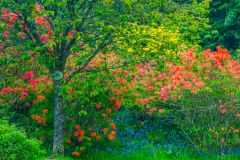 Nearby accommodation is calculated 'as the crow flies' from Loch Fyne. 'Nearest' may involve a long drive up and down glens or, if you are near the coast, may include a ferry ride! Please check the property map to make sure the location is right for you.

More self catering near Loch Fyne >> 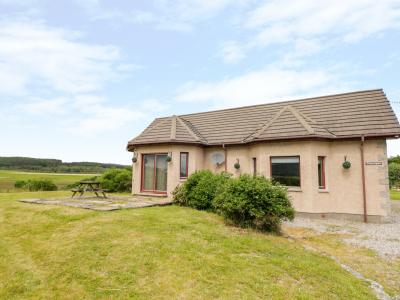 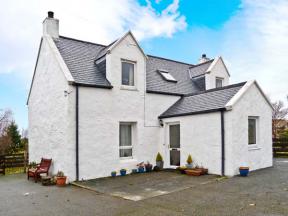