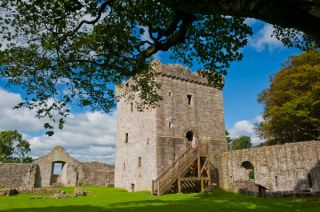 Remains of a 14th-century castle stand on an island in Loch Leven. Mary Queen of Scots was imprisoned here in 1567 and engineered a dramatic escape.

Lochleven Castle was built by Alexander III in 1257, on a small island in the middle of the loch. In 1296 it was captured by the English, who left a garrison of 30 knights to defend it. The garrison proved woefully inadequate when William Wallace attacked the castle the following year and put all the English to death. The English struck back, besieging Lochleven in 1300-1, but a relieving force under Sir John Comyn sent them packing. The castle underwent another siege in 1333 when Alan de Vipont held it against Edward Balliol. Balliol's men tried to dam the loch, but their efforts backfired when the backed-up waters broke through and washed away their own camp.

In more peaceful times the Bruce kings stayed at Lochleven while hawking in Kinross. The Stewart monarchs preferred the comforts of nearby Falkland Palace, and Lochleven faded in importance. 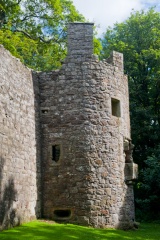 The castle began to be used as a prison, or at least, a gilded cage for important people in disfavour with the reigning monarch. Archibald, Earl of Douglas, was imprisoned at Lochleven and died here in 1439. The 4th Earl of Morton stayed here after falling from power in 1578, but it is another famous prisoner whose name is more popularly linked to the castle.

The history of Lochleven Castle will forever be entangled with the story of its most famous inhabitant, Mary, Queen of Scots. When Mary's armies lost the Battle of Carberry Hill in 1567 she was imprisoned in Lochleven Castle by her half-brother, Lord Moray. Moray had the nerve to declare that the queen was detained only for her own safety, a claim that fooled no one. 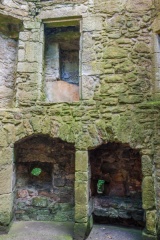 While a prisoner at Lochleven she was visited by the Lords Ruthven, Lindsay, and Melville, who brought papers of abdication for her to sign. Pressured by her enemies, Mary agreed to sign the documents, but whether she ever intended to abide by the agreement is anyone's guess.

Her stay was neither a comfortable nor a happy one. On 29 July 1567, the laird of Lochleven reportedly celebrated the coronation of Mary's son, James, in her place, by lighting bonfires in the courtyard and firing canons. There was singing and dancing in the garden while members of the laird's household taunted the queen.

Two stories are told about Mary's imprisonment at Lochleven. In one, she is said to have given birth to twins, but the infants were stillborn and were buried somewhere on the island in an unmarked grave. The other tale suggests that she gave birth to a daughter, the result of her marriage to the Earl of Bothwell. The child was smuggled to France, where she was kept at the convent of Soissons to be used as a diplomatic pawn if needed. 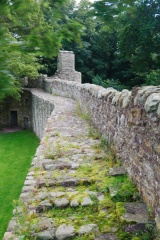 Is either tale true? Well, Mary is recorded as having spent long periods in bed at Lochleven Castle. She may have been ill, but most scholars suggest that she did give birth, and that that the child or children were probably stillborn. But the story does not end there, for the ghost of Queen Mary is said to haunt the castle, searching in vain for her lost children.

Mary's supporters, meanwhile, plotted to free her from her island prison, and in 1568 they succeeded in a dramatic affair worthy of Hollywood movie plot. Central to the plot was a young squire named Willie Douglas (or Dunning). Young Douglas became attached to Mary during her stay and helped smuggle letters to her supporters. He took advantage of May festivities, and under the guise of the Abbot of Unreason, the Scottish equivalent to the English Lord of Misrule, managed to get the castle garrison drunk.

Aided by the laird's brother, George Douglas, Willie nailed all but one of the castle's boats to the shore. Mary was rowed across the loch in the middle of the night, and they rode away on the laird's own horses. From Lochleven she raised an army to make one last attempt to defeat her enemies, an attempt that ended in failure at the Battle of Langside. 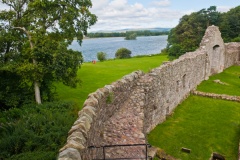 More of the wall walk

Outside the castle stand a couple of cannons, recovered from the loch. These were kept at Kinross house for many years before being moved to the castle in 1971. But do they belong here? Though traditionally associated with the castle, the cannon date to around 1800, by which time the castle had been a deserted shell for over 2 centuries.

Dating to about 1550, this conical tower was added to the existing medieval castle to give it a more modern, fashionable appeal. The tower has a cellar with a channel from outside through water was poured into a cistern for storage. On the ground floor is the chamber made available to Mary, Queen of Scots when she arrived in 1567. Mary was said to be unimpressed. Her secretary later wrote to complain the queen's bed was absent, 'nor was there any article proper for one of her rank'. From this chamber, a straight stair led up to a bedchamber on the first floor, and then up to a study, or library on the second floor. This chamber gave access to the wall-walk. 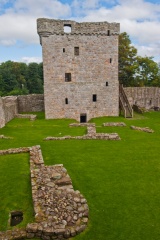 The kitchens (left)
and Tower House

The heart of castle life, this large square structure held the private quarters of the lord and his family. It was also the best-defended part of the castle. The Tower House was built between 1300-1350, making it one of the oldest fortified towers in Scotland. It was furnished for comfort and fashion; one of the ornate woollen wall hangings used at Lochleven is now in the Burrell Collection in Glasgow, and it shows how richly decorated the residential chambers were.

The ground floor was used for storage, with a kitchen on the first floor. Look for a slop drain in the window, used to empty kitchen garbage directly outside the walls. One unusual feature at Lochleven is that the main entrance is on the second floor, accessed only by a steep stair. Not only was this more secure, but it helped avoid flooding, which would always have been a threat given the low-lying nature of the island.

On the second floor is the hall, where the laird dined and entertained. In the floor is another unusual feature; a hatch connecting to the kitchens below. This acted as a 'dumb-waiter', a quick way to pass food between the floors.

The top floors held private family quarters. Mary, Queen of Scots was held captive here throughout the bulk of her imprisonment in 1567-68. 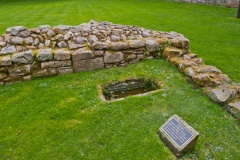 Foundations of the kitchen

Standing beside the Tower House, this is where Queen Mary came in 1563 as a visitor, and where she held he famous debate with Protestant agitator John Knox.

Access to the castle is only by boat from the visitor centre at Kinross. Since water conditions can make the crossing difficult in windy weather it is always a good idea to check ahead to see if the castle is accessible, or simply wait for a patch of good weather to visit! We were fortunate to visit on a day when the loch was as calm as glass, and the scenery was simply stunning. What a glorious location!

The loch itself is a scenic spot, known as the most important roosting site for grey geese in Britain. In the winter more than 20,000 geese, swans, and ducks make the loch a stopover on their migrations, and over 35,000 migrating birds stop here in Autumn. On the shore looking across to the castle is Kinross House, built by Sir William Bruce of Balcaskie, the architect who rebuilt Holyroodhouse in Edinburgh in 1671. 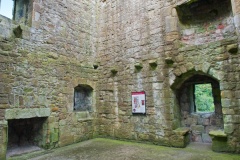 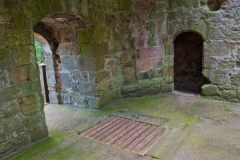 Floor hatch to the kitchens 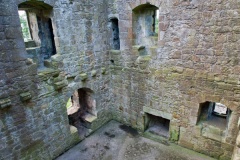 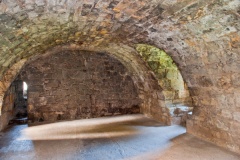 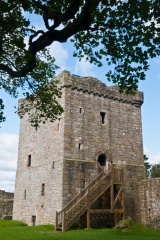 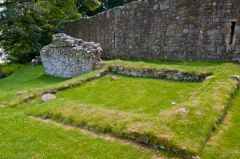 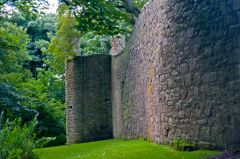 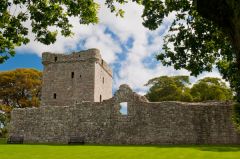 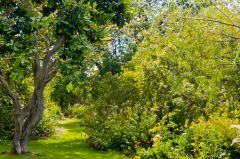 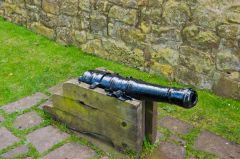 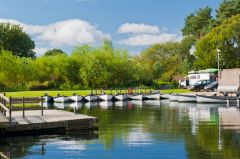 More self catering near Lochleven Castle >>