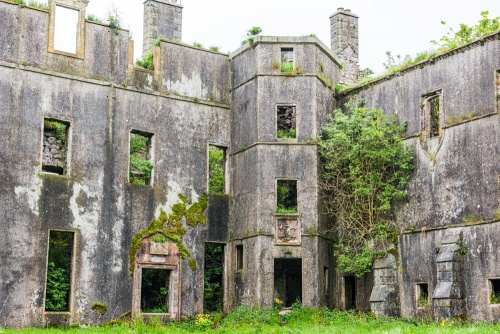 Kenmure Castle is a ruined 16th-century tower house, later remodelled into a Victorian mansion. The castle sits on the site of an early medieval fortress owned by the Lords of Galloway and is said to be the birthplace of John Balliol in 1249.

Very little is known about Kenmure Castle's beginnings. The site atop a natural rocky mound is thought to have been used by the Lords of Galloway, rulers of a semi-autonomous kingdom.

The last independent Lord of Galloway was Alan fitz Roland, whose daughter Devorgilla married John, 5th Baron of Balliol, in 1223. Their son, also named John, would claim the Scottish throne as King John I in 1292 before his forced abdication four years later. 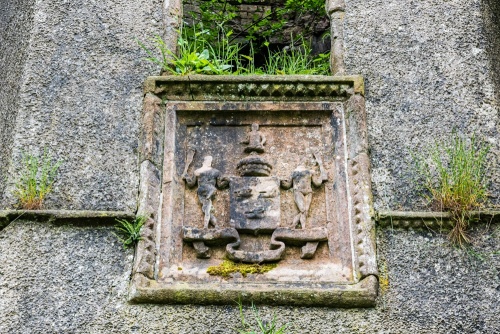 It is possible, given his mother's close ties to the area, but Kenmure is just one of several locations put forward as a possible birthplace. Others include Barnard Castle in County Durham and Buittle Castle near Dalbeattie.

Kenmure was a stronghold of the powerful Gordon family from 1297. We know nothing of the Gordons' castle, but we do know that King James IV stayed at Kenmure Castle in 1508 after making a pilgrimage to Whithorn. According to court records, he amused himself by playing an early variant of backgammon while staying at Kenmure. 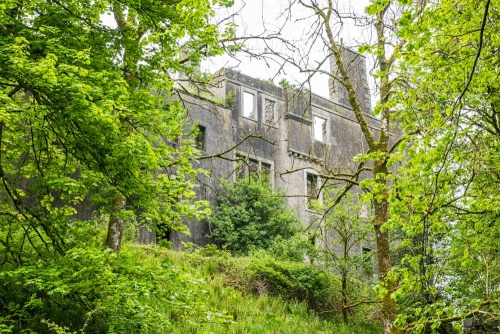 The castle from the western drive

Mary, Queen of Scots was the guest of Sir John Gordon at Kenmure in 1563. Five years later, Mary's enemies burned the castle after victory over the queen's army at the Battle of Langside. After Mary fled to England, Regent Moray met with the English envoy at Kenmure.

In 1650, troops under Oliver Cromwell once more burned the castle in retaliation for the Gordons' support of King Charles I.

The castle we see today was begun in the middle of the 17th century during the ownership of Sir Robert Gordon and his son John, Viscount of Kenmure. That 17th-century building consisted of two wings and a high wall enclosing a central courtyard, with an entrance on the north side defended by a pair of corner towers.

The 6th Viscount of Kenmure supported the Jacobite cause in the 1715 uprising and, as a result, was executed for treason and had his estates seized by the Crown. It was not until 1824 that the viscountcy was restored. 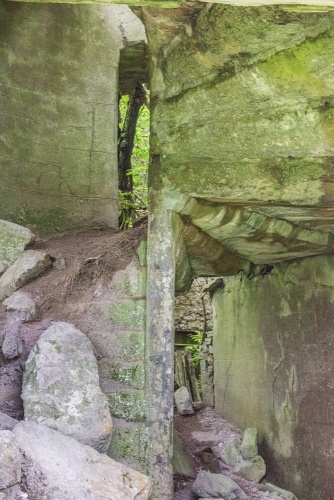 Long before then the castle had fallen into decay, but it was fully restored in the Victorian period. The high wall that enclosed the courtyard was destroyed, and one of the towers along with it. The south wing was restored in 1840 and the west wing in 1879. The castle was extended in 1908.

It operated for several years as a hotel, but in 1958 the interior was stripped and the roof taken off, leaving the building a shell. Some later reports suggest that the castle was destroyed by fire, but this seems to be a groundless invention.

Kenmure Castle is said to be haunted by the spectre of a headless piper, though details of who the ghost is or why he haunts the ruins are unclear. 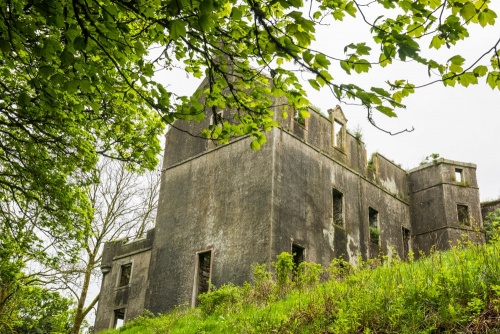 Kenmure Castle stands at the northern tip of Loch Ken reservoir, about half a mile south of New Galloway village, on the A762. The site is well hidden from the road, and there are no signs, but don't let that deter you; it is actually quite easy to visit. Look for the cluster of buildings at Strathken, on the east side of the road. Opposite the buildings is a lay-by with room for five or six cars and signposted forestry footpaths.

One hundred yards further south on the A762, past Strathken but on the same side of the road, is a gated drive with room for several vehicles, set back from the road and shaded by overhanging trees. This inauspicious and unsignposted gate is the entrance to the Kenmure Castle grounds.

If you cross Burnfoot Bridge, you've gone too far!

If you park opposite Strathken, you need to cross the road to the eastern side and walk south until you come to the Kenmure Castle drive.

The gate is kept closed but there is a stile on one side. Just go over the stile and follow the drive, which runs straight as an arrow east, down a dip before rising to the castle. 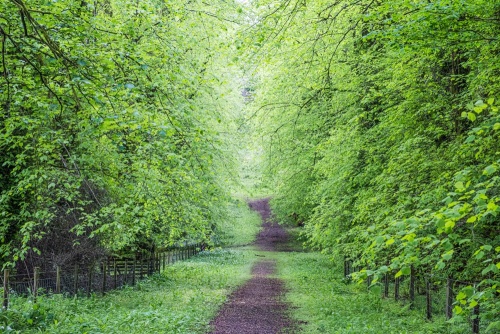 Please take great care near the castle; it is old and in a very poor state of preservation, and there is a very real risk of falling masonry. Please heed the warning signs and do not attempt to enter the ruins.

We also advise wearing good footwear; there is high grass around the castle and it can be very wet after rain. We found out the hard way that long, wet grass leads to uncomfortably wet feet!

Highlights that you can see from the castle exterior include two doorways with Gordon coats of arms over the entrance, and the ruins of a spiral stair, glimpsed through one of the doorways.

Though in decay, the castle ruins are quite impressive, and the rural setting is idyllic.

More self catering near Kenmure Castle