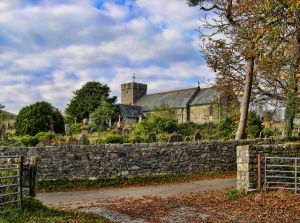 Penderyn, St Cynog Church
St Cynog Church in Penderyn is a late 13th century church on a rocky rise, rebuilt in 1895. The extremely large churchyard contains exceptional monuments and offers superb views over the nearby mountains.

It is possible that a church has stood on this elevated site since the 6th century, and that the early church was founded by, or at least visited by, the Celtic saint, Cynog himself. Cynog was a member of the Brychan family of Brycheiniog, who produced several early Christian saints. He is known to have established several nearby churches including Defynnog and Ystradgynlais.

The first small timber church here was burned down during one of the periodic outbreaks of war between the Marcher lords. It seems that Humphrey de Bohun of Brecknock and Gilbert de Clare of Glamorgan both claimed Morlais Castle.

Defying the express orders of the king to find an amicable solution, de Clare sent armed men to capture the castle. They found it deserted, so the marched on into Brecknockshire, burning everything in their path. As they marched through Penderyn they destroyed the church. It was several years before the church was rebuilt; perhaps only after Gilbert's death in 1295.

Another version of the story says that de Clare offered to rebuild the church as compensation for the actions of his men. The wooden building was rebuilt in stone, and a tower added at the same time.

The church stands within a huge churchyard, holding an estimated 10,000 burials. It was thought to be an honour to buried at Penderyn. Certainly the number of extravagant family vaults near the tower suggest that numerous wealthy families considered it worthwhile to bury their dead here! Within the stone wall enclosing the churchyard is set a fold, or pen, for storing stray sheep.

The oldest part of the curent building is the embattled west tower, dating to the 13th century. The rest of the church is largely the result of a late Victorian rebuilding which swept away many of the medieval features. The oldest stained glass is the striking west window, given in 1886 by the Morgan family of Bodwigiad.

In a small glass case near the font is an earthenware bell, discovered in a nearby barn. It is thought to have been taken there for safekeeping during Cromwell's Commonwealth. The bell was most frequently used by the sexton, and rung while a body was carried from the lych gate to the church. 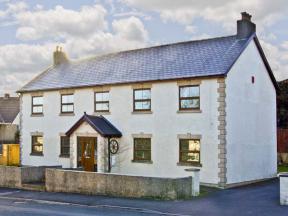 This detached cottage is located in the village of Penderyn in the Brecon Beacons and sleeps ten people in five bedrooms.
Sleeps 10