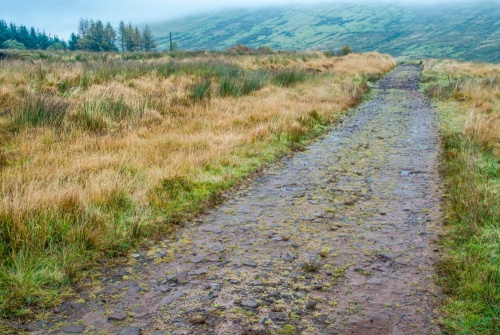 Sarn Helen is one of the best-preserved stretches of Roman road in Wales. The road runs north from Coed-y-Garreg toward Brecon. The method of construction can be best seen at Maen Madoc, where the cobbled surface and ditch is exposed.

When the Romans invaded Britain in 43 AD they needed a system of roads to move troops and goods around their new territory. Compared to the existing tracks and trails across Britain the Roman roads must have been an extraordinary social revolution.

Some of the roads the Romans built have been absorbed into our modern road system, but others, particularly across wild or isolated countryside, still remain. One such stretch of road is known as Sarn Helen.

In truth the name refers to not one stretch of road but several linked sections, stretching 160 miles through central Wales, from Carmarthen to Aberconwy. 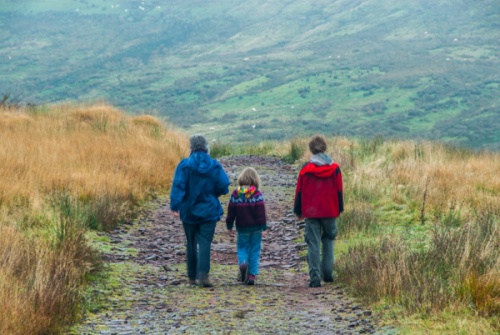 Another section of road on the fringes of the Brecon Beacons between Brecon and Neath is also called Sarn Helen. It is this section of the road that our family visited, combining it with a trip to see the standing stone known as Maen Madoc.

To reach Sarn Helen we took the minor road north of Ystradfellte to a Forestry Commission parking area beside the Afon Llia. From there a trail leads uphill, past the site of a Roman camp, to the road.

The easiest section of the road to make out the construction is after it emerges from the Forestry plantation and reaches the standing stone of Maen Madoc.

You can clearly see the cobbled surface built by the Romans. Though you certainly do not need to extend the walk to the standing stone, I'd recommend it, for the stone, though erected in the Bronze age, also bears a Latin inscription, possibly carved to mark the site of a Romano-Christian burial.

As a point of interest, the Romans did not call the road Sarn Helen; the name refers to the story that St Elen of Caernarfon ordered it to be built in the 4th century AD. 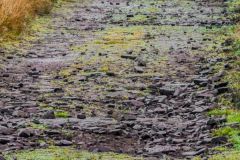 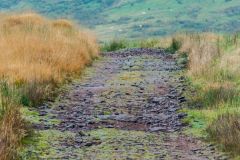 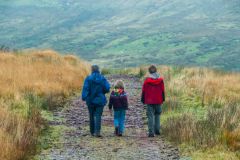