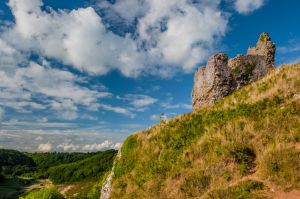 A wonderfully situated early 12th-century castle overlooking Three Cliffs Bay and Penmaen Burrows, Pennard Castle was probably built by Henry de Beaumont, 1st Earl of Warwick. Beaumont created a ringwork fort surrounded by a bank and ditch, with a stone hall within the earthworks. Of this early fortification only the foundations of the hall are still visible.

Pennard was strengthened by the Braose family in the 14th century when the early earthwork defences were rebuilt in stone, with a curtain wall surrounding a small courtyard. Access was by way of an eastern gateway, with twin semi-circular towers flanking an entry passage.

The Mowbray family took ownership in 1321. A small settlement grew up near the castle, complete with a church. There is no sign of the settlement now, and of the church only part of a single wall remains standing. What happened to the castle and the village? As far as we know Pennard never saw any military action, so why was it deserted? 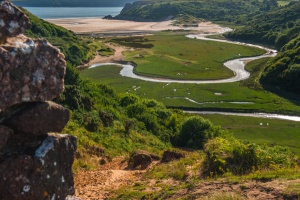 The view towards Three Cliffs Bay

The answer lies in the layer of sand that covers everything. The dunes that stretch down to Three Cliffs Bay have gradually enveloped the entire site, making settlement impossible. We don't know precisely when Pennard was abandoned, but the church ell out of use in 1532.

At the end of a 4-day whirlwind tour of historic sites in south Wales, I asked my son what had been his favourite site. Without hesitation, he replied 'Pennard Castle'. I did not have to ask him to explain his choice; I knew exactly what he meant.

There are more famous castles in the area (think of Oystermouth, Laugharne, or Kidwelly). There are better-preserved castles - almost all of them. There are castles associated with historic people and events. But there is nothing to match the sheer drama of Pennard; the scenic beauty of the location, with the ruined castle perched atop a steep cliff looking out over sand dunes to where Three Cliffs Bay lies gleaming in the sun. In truth the ruins of Pennard are scanty, but this is a place you can sit for an hour by the ruined walls, doing nothing but taking in the scenery, and consider it an hour well spent. 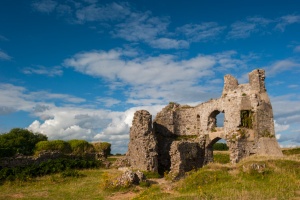 The gatehouse and inner ward

There is no vehicular access to Pennard, and when you see the location you will understand why. I suggest you park at the Gower Heritage Centre, near Parkmill. The Centre has a free walking map that shows several routes to Three Cliffs Bay, and the upper route takes you directly past the castle.

Take the signed footpath that starts opposite the Heritage Centre. The path crosses a footbridge then turns right to follow a small stream. After 100 yards the trail forks; take the upper route, signposted to Southgate.

The trail climbs a moderately steep hill through very pleasant woodland until it emerges into the open on the edge of a golf course. The trail skirts the golf course, and you can see Pennard Castle come into view in the distance. It should take 20-25 minutes to reach the castle from the Heritage Centre.

In truth, the castle ruins are not extensive, so it won't take long to explore the site, though you may well be tempted to sit and gaze at the scenery for some considerable time!

I've visited a lot of historic sites, so I can say this with authority: Pennard is outstanding. Alone, the castle isn't very impressive. All that remains are a few rooms and the front of the gatehouse, now partly supported by a concrete layer. But as a part of the whole landscape, the castle fits perfectly. It rests atop a cliff some distance from the sea.

The land in between is best described as a dry-land bay. The valley is flat apart from the shallow groove carved by the river, and walled by large hills, covered mostly in hardy grass and bracken. In the late afternoon sunlight, the whole scene becomes both stunning and peaceful, the water bright, beach golden, the plain a strong green.

The castle has no vehicular access: you must walk twenty minutes from the car park. This alone is worth the time. The path meanders through a pleasant woodland (for sale, at the time of writing), then passes along the edge of the hilltop Pennard Golf Course. We of Britain Express had no problems here, but it's best to keep an eye on the sky. The most troublesome part of the journey is the sand. The hill seems to be like a large dune, and indeed the castle's sandy foundations are slowly slipping away.

The area has enough beauty to keep anyone occupied for a day, and what a nice day it would be! Pennard will stick in my mind for years to come, and I will be sure to return to it. If you visit one place in Wales, nay, Britain, let it be Pennard. If you enjoy relaxing in peaceful places, it will be worth the visit even if you have to wait a week for the right weather. Which, by the way, was consistently nice throughout our visit. 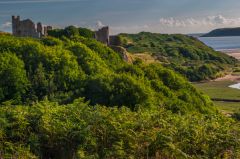 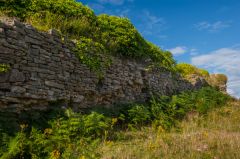 More self catering near Pennard Castle >>