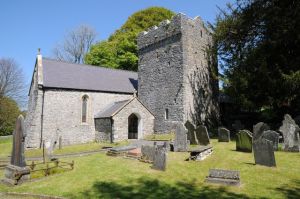 Ilston, St Illtyd
St Illtyd 's is a pretty 13th century church incorporating the remains of a 6th century cell. Known as one of the first Baptist places of worship in Britain, despite the fact it is an Anglican church!
History
There was probably a monastic cell established at Ilston as early as the 6th century. The first written record of a church comes from 1119, then in 1221 the church was granted to the Knights Hospitallers. When the knightly order was dissolved at the Reformation the patronage passed to the crown.

In the 13th century a stone church was built under the patronage of the local de Breos family, incorporating the 6th century cell into the base of the saddleback tower.

The medieval church was heavily restored in 1832, but thankfully much of the medieval structure was unaltered, though most of the interior furnishings are Victorian. One of the best memorials is that of Jane Mansel (d. 1789), to the right of the altar. Most of the glass is 19th century, and there are a number of quite plain 18th century memorial in the nave.

In the churchyard, south of the vestry, is the Pryce family vault, built in Regency style. In the south wall are a pair of stone commemorating Joseph Pryce of Gellyhir (d. 1785). Also in the churchyard, opposite the entrance., is an ancient yew tree which is probably at least as old as the church itself.

The Baptist Connection
Ilston church is interesting for an unusual reason. In 1649 John Miles became rector here. He was imposed on the parish to replace the incumbent, a committed Royalist. For Miles was a staunch Parliamentarian, and more importantly, one of the early enthusiasts for a new form of Puritan worship which would become the Baptist religion. From 1649-1660 Milton held Baptist services at St Illtyd's church, though the church was referred to as a 'meeting house' by the congregation. That makes St Iltyd's the very first Baptist place of worship in Wales and one of the first anywhere in the world.

Miles insisted that only Baptist believers could attend services, though it seems likely he would also have held services for Anglican believers, who formed most of his parishioners. However, when Charles II was restored to the throne in 1660, dissenting assemblies were made illegal. Miles and his Baptist congregation set sail to a new life in America, establishing the town of Swansea in the Massachusetts colony.

The church is usually open daily during the summer.