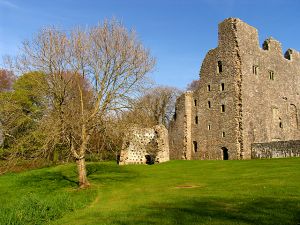 Oxwich Castle
This 'castle' is actually a 16th century Tudor manor house built in courtyard style by Sir Rice Mansel (1487-1559) about 1541, on the site of an earlier medieval castle. The Mansells were for many years one of the most influential gentry families in Glamorgan. A substantial medieval tower stands about 90 metres from the house ruins. The original Oxwich Castle dates to at least the 13th century, on a headland to the west of Oxwich Bay.
The mansion fell into disuse during the 17th century, and the south east range was used as a farmhouse. The best surviving feature is the north-east range, built of limestone rubble dressed with sandstone. There are two vaulted undercrofts and a partial staircase to a vaulted kitchen. The castle court is reached through a military style arch.

Oxwich is one of four major castles in the Gower peninsula, others being Pennard, Penrice, and Weobley, all of which can easily be visited in a single afternoon.

More self catering near Oxwich Castle >>