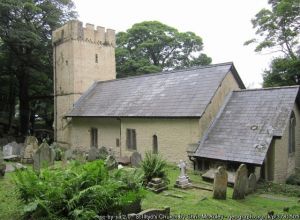 Oxwich, St Illtyd Church
A medieval church with battlemented tower and painted chancel ceiling, said to mark the site of the original cell of St Illtyd.

St Illtyd himself is said to have brought the font of Sutton stone to Oxwich. A Norman church was later built on the site of the saint's cell, with the tiny chancel - where the high altar stands - over the cell itself. The chancel arch is Norman and the nave itself and the west tower are 14th century.

Entry is through the west door of the tower, and inside the door is a pair of gravestones against the wall. One is the coffin of William de la Lake, rector in 1320. The stone was found used as a slab inside the inner door. The other slab is 14th-15th century and was found face down in the nave. It is inscribed 'Hugh, formerly the pious rector of Saint Illtyd's Church, lies here'.

Set under a niche in the north wall is the effigy of a medieval knight and his lady, thought to be members of the De la Mere family, though their exact identities are unknown. The De la Mere's owned Oxwich Castle, and the couple may be a lord and lady who tragically drowned in Oxwich Bay in the early 14th century. The costumes suggest a later date, however, so perhaps they represent Sir John Penres and Margaret Fleming, holders of the manor in the 15th century.

In the churchyard is dried up well traditionally held to be haunted. A ghostly 'water horse', or ceffyi dwr, was said to appear in the churchyard then vanish mysteriously in the well. At the rear of the churchyard is the poignant grave of a Royal Navy sailor whose body washed ashore during the First World War. He was never identified, and the gravestone inscription merely says, 'Known unto God'.

The church key can be obtained from the rector if you wish to visit the church.