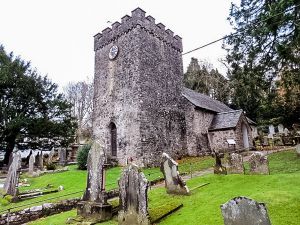 Bishopston, St Teilo
St Teilo Church is a 13th century church with a battlemented tower, built on the site of a 5th century cell. The interior has a 12th century font and a very nice 15th century hammerbeam roof made of oak.

St Teilo's is one of the earliest Christian sites in Wales, with a history going back to the 5th century. According to the Book of Llandaff, a church was established here by St Teilo himself around 460 AD. This early church was a traditional Welsh llan, an enclosure where believers met to worship.

It was only later that a small stone chapel was built on the llan site. In 1130 the church was granted to the Bishop of Llandaff. The Bishops established a manor and court here, which operated until 1923. The name of the village comes from this connection with the Bishops.

The church has an early English tower typical of churches on the Gower peninsula. The tower, nave, and chancel date from the late 12th or early 13th century. The church roof was thatched until 1831. The clock was installed in 1886 after years in use at the Swansea Old Brewery.

Inside is a Norman font, made from a solid block of limestone. There is a piscina from around the same period. Outside the churchyard are the remains of a medieval cross.

The church key can be obtained from the Winston Hotel nearby.