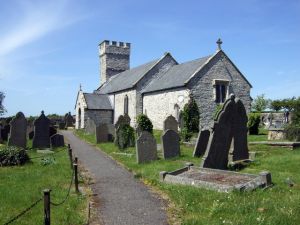 Pennard, St Mary's Church
St Mary's is a late 13th century church established when an earlier church became overwhelmed by sand. Look for the medieval window and font, and a Jacobean pulpit and font cover.
History
The first church at Pennard stood near the castle, overlooking the Gower coast. Scanty remains of this early medieval church can still be seen. Unfortunately, as with so many places along the Gower coast, the sand moved in, and the church was inundated and ceased to be viable by the early 16th century.

The Pennard parishioners then moved to St Mary's further inland. But wait! St Mary's shows signs of 13th century stonework, so its clear that the building existed centuries before it became the parish church for Pennard. Did it, in fact, pre-date the church beside the castle?

Another alternative theory is that stone from the original church by the castle was salvaged and incorporated in an entirely new church further inland, safe from the encroaching sand.

Early medieval features remaining in the current building include a window decorated with dogtooth mouldings, and a medieval water stoup now used as the font. The font is topped by a Jacobean cover brought here from Sonning in Berkshire, and a beam that supports the gallery might be the original medieval rood-beam. The font is made up of two parts; the font bowl may be the inverted base of a cross-shaft, while the lower section may have been a millstone. The square base under the font may have been the base of an earlier medieval font.

Another historic feature inside the church are 17th century rails around the sanctuary. The pulpit is made up of Jacobean panels brought here from Shiplake church in Oxfordshire. The carved panels depict heads of beasts. In the chancel is a marble tablet to John Bennet (d. 1723) and his son, who died just 3 years later. On the north wall are more 18th century memorial to the Beale family.

The church was heavily restored in 1847 and again in 1891. A pair of poets, Harri Webb, and Vernon Watkins, are buried in the churchyard.

To the best of our knowledge St Mary's is open every day to visitors. The church is located at the junction of Pennard Road and the B4436 between Southgate and Bishopston.