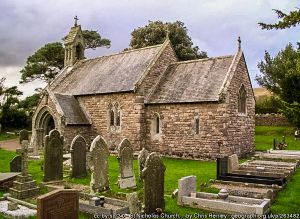 Nicholaston, St Nicholas Church
St Nicholas is a Victorian restoration of an earlier medieval church. The font is Norman, and there is a Celtic cross slab in the porch. The Victorian reredos is an ornate alabaster work of art.
History
The first church at Nicholaston was built close to the sandy cliffs that overlook the sea. The sand gradually moved in and made the site unusable, so some time in the 14th century a new church was built inland. A local tale says that the original church was dismantled, stone by stone and reassembled in the current site.

Inside the church is a Norman font probably brought here from the first church by the sea, and another historic relic is a Celtic grave slab in the porch. The font is carved from a single slab of stalagmite. There is a bell dated 1518, and a statue of St Nicholas in a niche over the porch.

The church was comprehensively rebuilt in 1894 by Miss Olive Talbot as a memorial to her father, CRM Talbot of Margam Castle and Penrice Castle. Tragically, Miss Talbot died just a few weeks before the church reopened. She is remembered by a memorial plaque on the north wall of the nave.

The 'new' church has been described as a Victorian jewel box', a wonderful example of late Victorian style and sensibility, an elaborate exercise in Early English design, with ornate details and the finest materials used throughout.

The rebuilding swept away many of the original medieval features, though it did retain the medieval chancel arch. The result is a very pleasing Victorian church, with richly carved late Victorian woodwork and a striking reredos made of alabaster. There are excellent stained glass windows, depicting Biblical stories such as Christ Blessing the Children Brought by their Mothers, and The Three Seraphim.

Visiting the church is a peculiar experience; it is remote from the village it serves, standing just off the A4418. There are no parking spaces, just a small layby or two.

St Nicholas' church is known locally as The Cathedral of Gower. Unfortunately, because the church is far from the village it is usually kept locked except for specified days in summer. See the official church website for details.