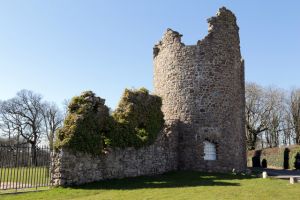 One of several interesting medieval castles on the Gower peninsula, Penrice was built in the 13th century on a headland to the north of Penrice Dingle.

Shortly after the Norman invasion of south Wales one of the successful invading knights was granted land near what is now Penrice village. He took the family name de Penrice. The Penrice family still own the estate some 29 generations later, though the estate has passed from the direct line of descent several times and some of the outlying lands have been sold off over time.

Shortly after the Conquest, an earthwork castle was erected, but by the early 13th century the earthwork defences were old-fashioned and outmoded. A new stone fortress was erected, and the core of this castle still stands, overlooking the present Georgian house.

In the 15th century the Penrice heiress, Isabel, married into the Mansel family, and as the Mansel's grew in fortune and acquired vast estates throughout south Wales, Penrice Castle was less useful to them. The castle estate was rented to tenants, but the medieval castle was of no use as a residence, so in the 16th century a farmhouse was built near the old castle.

Then in the 1770s Thomas Mansel Talbot, fresh from a Grand Tour of Europe and full of romantic ideals, decided to build a new neo-classical villa at Penrice. He called in Anthony Keck to design his new house and set about creating a romantic landscape garden in the park surrounding it. His garden designer was William Emes, a student of Capability Brown.

Emes laid out a glorious landscape of winding paths, lakes, and gardens with carefully arranged trees planted at strategic viewpoints. Though the garden has been extended, and a new terrace garden developed near the house in the late Victorian period, much of what we see is the 18th-century landscape.

The house was enlarged in the 19th century but was neglected in favour of the Talbot's main seat at Margam. Penrice became used only for shooting parties and rare family visits. Parts of the Victorian and Georgian house extensions have been recently torn down to make way for a rose garden.

Remains of the medieval castle include sections of a curtain wall and the stone keep. Attached to the north-east wall is a later dovecote. Penrice is close to Oxwich Castle - which is generally in a better state of preservation. 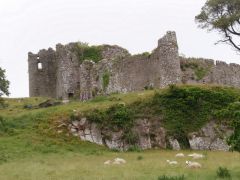 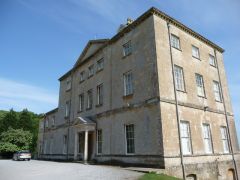 About Penrice Castle
Address: Penrice, Gower, Glamorgan, Wales
Attraction Type: Castle
Location: On the Gower peninsula off the A4118, on private land, but easily viewed from a nearby footpath
Location map
OS: SS492 879
Photo Credit: Alan Hughes, licensed for reuse under the Creative Commons Licence

More self catering near Penrice Castle >>