HERITAGE HIGHLIGHTS:   Based around a 13th century fortified house 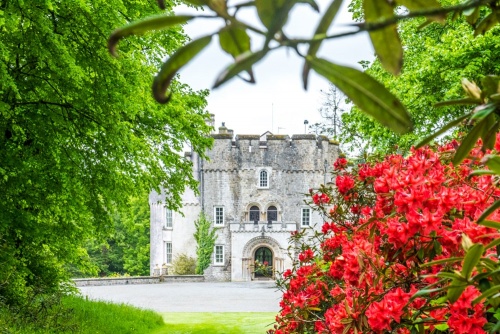 Piction Castle is one of the foremost stately homes of Wales. This 13th-century castle was transformed into an opulent 18th-century country house by the Philipps family, who owned the property for over 800 years. Surrounding the house is a superb 40-acre garden.

It seems likely that the first castle here was erected in the early 12th century when Henry I of England invited large numbers of Flemings to settle in the area.

In 1280 Sir John de Wogan, lord of Wiston, began to build the present castle. Sir John would serve as Justiciar of Ireland from 1295-1313 and Picton Castle was built in the style of an Irish fortress of the same period. The 13th-century castle was later enclosed by a walled yard that is presumed to be medieval.

Unusually, the castle had no central courtyard. Instead, the main block was defended by seven circular towers, with the two eastern towers linked to create a gatehouse. The entrance led past a portcullis into the great hall's undercroft.

In 1491 the Castle passed by marriage to the Philipps family of Cilsant in Carmarthenshire. In 1611 Sir John Philipps purchased a baronetcy from King James I and throughout the following century, the family were one of the most influential in Pembrokeshire. They owned vast estates, but Picton was their family seat. 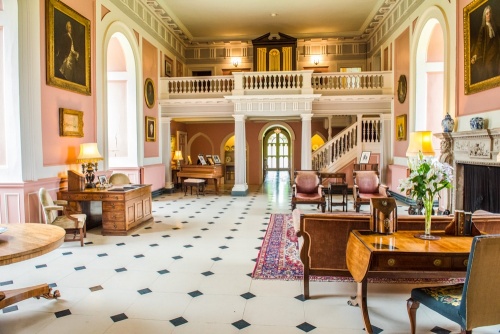 In 1697 Sir John Philipps, 4th Baronet, extended the house with a raised causeway on the east. He also raised the great hall by a storey to create the stunning chamber that is now the centrepiece of the house. Sir John was an active member of the Society for the Promotion of Christian Knowledge and helped promote the building of over 50 new churches in London. He is buried in St Mary's Church in Haverfordwest.

The 6th Baronet was succeeded by his son Lord Milford, who tore down the medieval tower and added a four-story symmetrical block to the west.

The Phillips's were one of the leading gentry families of south-west Wales, and it was thanks to a 20th century Philipps that Pembroke Castle was restored to its medieval grandeur after a period of decay. The Philipps lived at Picton for almost 500 years until 1987 when the last members of the family gave the castle to a charitable Trust.

After all those changes what we have at Picton Castle is a beautiful Georgian house based on a medieval castle.

The combination could be jarring, but the beautiful interiors more than make up for the odd mix of architectural time periods and styles. Your guided tour takes you from lush 18th-century chambers to the medieval vaulted cellars beneath. Picton Castle is a house that spans time and fashion.

You can only view the castle interior by taking one of the excellent timed tours. Our guide was outstanding and really brought the castle and the people who lived there to life. The tour highlights include the ornate great hall, the Georgian chapel, and the medieval undercroft. 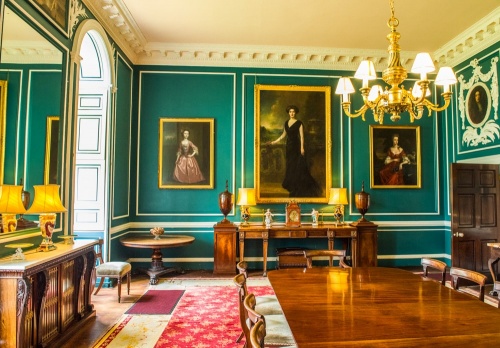 The mansion is surrounded by 40 acres of very popular woodland gardens, with a restored walled garden, fernery, and fountain. The Picton Castle Gardens have been called one of the finest gardens in Wales. Highlight features include a fernery and fern walk, a tree fern glade, bluebell walk, and a myrtle avenue. Look for the herb garden with plants carefully labelled by their medicinal properties. Throughout the garden are rare and unusual shrubs and wildflowers.

The gardens participate in the Royal Horticultural Society Regional Garden Scheme and showcase impressive collections of embothrium, eucryphia, and rhododendrons. It is the variety of rhododendron that makes Picton's garden so so special. There are also rare varieties of giant redwood trees and six Chamaecyparis obtusa formosana from Taiwan.

Evidence of the garden's origins is scanty; an estate map of 1746 shows deer parks north of the castle. Walled enclosures were erected near the castle at this time, and formal shrubberies were laid out along with topiary and formal ponds. Most of these formal garden features were swept away in the 18th century when the fashion for landscape gardens took over. In their place were wide lawns and open parkland punctuated by carefully arranged clumps of trees, creating viewpoints and wide vistas. 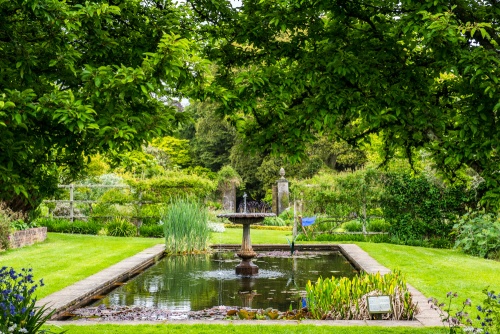 Fashions change, and by the early 19th-century formality made a return; the present walled garden was laid out in the 1820s, with a range of glasshouses heated by as boiler. Hot air passed from the boiler through brick flues in the glasshouse walls. In the 1860s the hot air system was replaced with hot water fed through cast-iron pipes. Also during the 1860s silver firs were planted along the drive along with Turkey oaks. On the lawn is a huge rhododendron of the same period.

In the castle courtyard is the Lumsden Vintage Lawnmower Museum, a fascinating collection of vintage garden mowers and other labour-saving garden tools. The collections date from the early 19th century to the present day and include lawnmowers made to be pulled by donkeys or small ponies.

The museum looks at the history of the 'lawn' in Britain, from the early 17th century when well-manicured grass was seen as a sign of wealth and status. The prize exhibit is a 42 inch 1923 Greens lawnmower powered by a four-cylinder Dorman engine weighing two tons. The mower was made for handling playing fields and s the only working sample of an early playing fields mower in existence.

Wealthy landowners would employ teams of servants to keep the grass trim with scythes. That all changed in the 1830s when engineer Edwin Budding created the rotary blade. Budding was actually trying to make a machine to improve the napping of cloth but in the process, he helped change gardening and changed the way we relate to our gardens - and helped cement the national mania for a well-kept lawn.

Picton Castle has something for everyone; the guided tour of the castle interior is outstanding, and the gardens, with their mix of formal and informal areas and wide variety of unusual plants, is one of the best in Wales, especially when the rhododendrons and azaleas are in bloom. 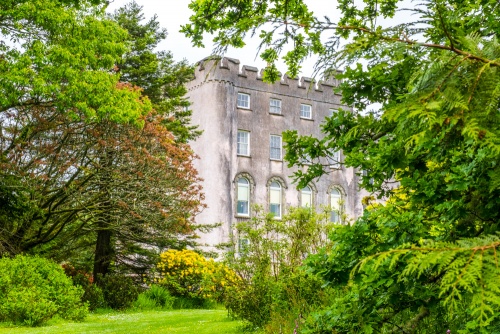 The castle glimpsed from the garden 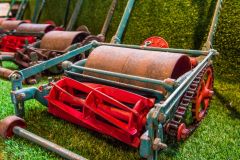 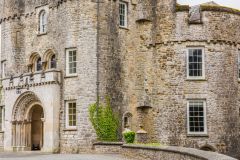 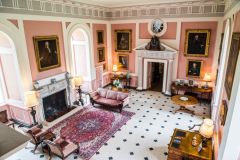 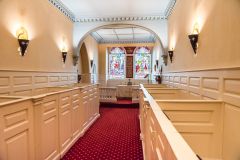 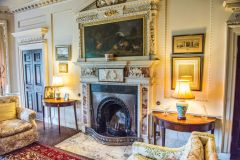 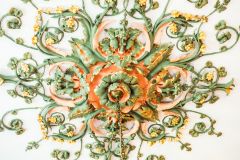 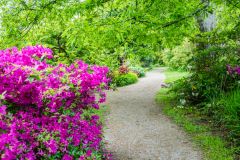 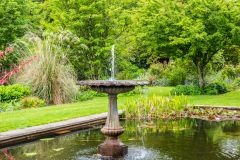