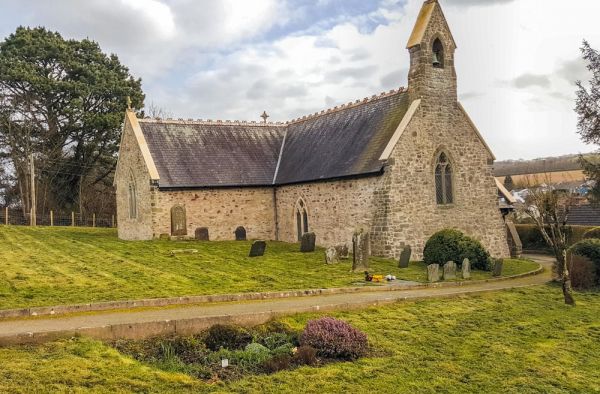 St Jerome's church at Llangwm was built in the late 12th or early 13th century. The presence of a pair of Celtic grave slabs from the 10th or 11th centuries suggests that there was some sort of religious presence here long before the present church was erected under the patronage of the Norman lord Adam de la Roche. The Welsh name Llangwm translates as 'the church in the valley', supporting the idea that there was an earlier church on this spot before the coming of the Normans in 1120.

One of those Norman invaders was Godebert the Fleming, grandfather of Adam de la Roche. Godebert settled at nearby Great Nash Farm. His sons Rodebert and Robert joined the Strongbow invasion of Ireland in 1167. Rodebert's son adam took the surname 'de la Roche' after he built a castle on a rocky promontory known as Roch.

The De la Roche family added a family chapel in the mid 14th century, shortly after the devastation of the Black Death swept Britain. The chapel is now the north transept. The transept holds a pair of effigies. One depicts Lady Margaret De la Roche (1254 – 1315), and the second is her grandson Sir Robert de la Roche (1315 – 1348).

The De la Roche family line died out in the late 14th century and the lordship lapsed by the early 15th century.

Aside from the two medieval effigies, the north transept is home to Talking Tapestry of Langum, an innovative project created in 2016 to tell the story of Llangwm and how it was transformed by the Norman / Flemish invasion of the 12th century.

The tapestry is based on illustrations by local schoolchildren, with individual panels sewn together to create a five-metre long tapestry. The tapestry starts with William the Conqueror's invasion of 1066, then follows the story of Godbert the Fleming, one of the Flemish invaders of south Wales under Henry I.

The third panel shows Llangwm church being built sometime around 1185, and the 4th panel shows the De la Roche family manor house. The fifth panel shows the 1315 marriage of Sir David Roche and Lady Johanna, a member of a different branch of the family. The final panel depicts scenes from the life of the last De la Roche descendent, Lady Margaret, who died in 1382. Lady Margaret was married to Sir Roger de Clarendon, who was executed for treason in 1402.

What makes the Talking Tapestry unusual is that visitors to the church can download an app for tablet or smartphone and listen to an account of the tapestry panels as narrated by Mabel, a real 13th-century character who is mentioned several times in local property documents. You can download the app by using the church's own wi-fi, for a small fee which goes towards maintaining this historic building.

As part of a recent archaeological investigation of the church, seven local men were DNA tested to see if they had any Flemish blood. One of the seven men proved to be a direct descendant of Godbert the Fleming.

The church is usually open to visitors from Easter through September.

Note
There are two villages named Llangwm in Pembrokeshire. Don't confuse this Llangwm with the village of the same name northeast of Haverfordwest. 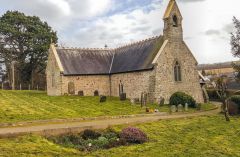 Self Catering near Llangwm