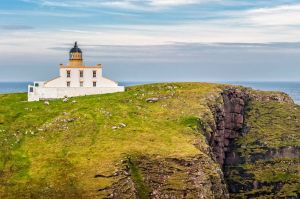 Stoer Head Lighthouse is a historic 19th-century lighthouse in a dramatic coastal location on Stoer Point, north of Lochinver, Sutherland. The lighthouse was designed by David & Thomas Stevenson, members of the famous Stevenson family of engineers and chief engineers for the Northern Lighthouse Board.

The headland at Stoer was one of 45 sites around the coastline of Scotland identified by the Stevensons as potential hazards to shipping. The lighthouse was built in 1870 and was manned until 1978 when the light was automated. Now the light is operated from Edinburgh and only visited occasionally for essential maintenance. The lights are sealed beam electric lights, of the sort used in automobile headlamps.

The lighthouse buildings are not generally open to the public, but I've included Stoer Lighthouse in this guide because it is a good example of the sort of lighthouses that the Stevensons built in remote areas all across Scotland. And the location is wonderful, so it deserves to be visited!

From the lighthouse parking area, there is a trail along the cliffs north to a sea stack known as the Old Man of Stoer.

There are no facilities at Stoer, though if the weather is decent a local coffee van may make an appearance.

I had a chance to chat with the operator of the coffee van (while sheltering from the cold and wrapping my hands around a warm cup of coffee!). She told me that she has seen people pull up in a car, get out, take one photo, get back in, and drive away. Yikes! It's a bit more interesting than that, really! 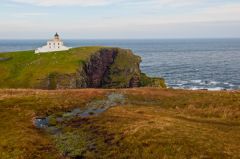 Nearby accommodation is calculated 'as the crow flies' from Stoer Head Lighthouse. 'Nearest' may involve a long drive up and down glens or, if you are near the coast, may include a ferry ride! Please check the property map to make sure the location is right for you.