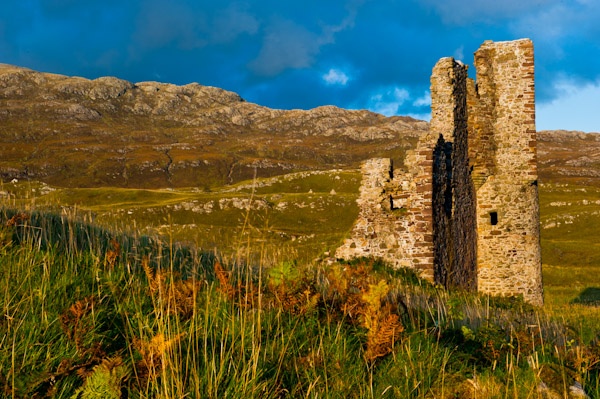 A marvellously scenic ruined fortress in a magnificent location under the brooding bulk of Quinag, Ardvreck Castle (Aird Bhreac in Gaelic) is a 15th-16th century L-plan fortified tower house and the traditional seat of the MacLeods of Assynt. The castle was constructed by Angus Mor III in the late 15th century, perhaps in 1490. That first castle was a simple rectangle, 3-4 storeys high. 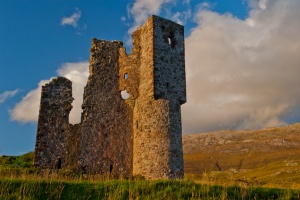 The MacLeods were traditional lairds of Assynt and Sutherland and construction is sometimes attributed to Neil MacLeod. Sometime in the late 16th century Donald Ban IX added a tower, vaulted cellars with gunloops, and a vault above the great hall to create the outline we see today. As is common with Scottish tower houses there is a projecting stair tower corbelled outward in the angle of the 'L', topped by a caphouse.

The site chosen for the castle was an easily defensible one on a small promontory of land jutting out into Loch Assynt. Today the promontory is sometimes cut off by high water, leaving Ardvreck on an island.

Ardvreck was never large, so the castle promontory required a range of other buildings, including stables, kitchens, and living quarters for servants. The outline of a kiln barn can be found on the southern edge of the promontory, near the site of a small walled garden, and there are stone rampart walls and a ditch near the promontory neck. On the mainland, near the promontory, is evidence of ironworking, and a small mill to the north. On a small rise overlooking Ardvreck is a small chambered cairn.

Ardvreck's most famous moment on the stage of history came in 1650, when James Graham, the Marquess of Montrose, fled here following his defeat at the Battle of Carbisdale against the Covenanters. Montrose had come to the Highlands and raised an army in support of the royalist cause. After defeat in battle, he fled to Ardvreck and there sought sanctuary.

Now the sequence of events becomes shrouded in mystery. One version of what happened next is that the laird of Assynt, Neil MacLeod, was away, but his wife Christine, allowed Montrose to enter, then trapped him in the dungeons and sent word to the Covenanters.

Another version is that Neil MacLeod was indeed in residence. He offered Montrose shelter, then treacherously sent word to General Leslie, head of the Covenanter army, telling him where his enemy was hidden. In exchange for this treachery, MacLeod received £20,000 and 400 bowls of meal - which proved to be rancid.

From Ardvreck the unfortunate Montrose was taken to Edinburgh for trial and brutal execution as a traitor. Neil MacLeod always denied his role in events, and it is possible that the traditional evidence against him was based on accusations by his bitterest rivals, the MacKenzies of Wester Ross. The betrayal of Montrose is said to mark a sudden decline in the fortunes of the MacLeods of Assynt.

In 1672 the MacKenzies besieged Ardvreck. The siege lasted 14 days and ended with the MacKenzies victorious. This defeat effectively ended the MacLeod rule over Assynt. Even after this defeat, the castle remained relatively intact. Then nature took a hand; in 1795 Ardvreck was struck by lightning and destroyed, leaving only a crumbling ruin. The north wall is entirely gone, and only parts of the east and west walls remain. 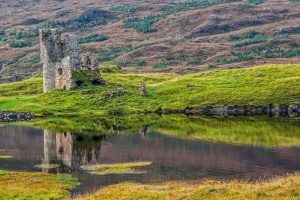 Ardvreck Castle reflected in the loch

Legends cling to the enigmatic ruins. It is said that the ghost of a MacLeod chieftain's daughter wanders the beach, weeping. She married the Devil in an effort to save the castle from destruction, then she drowned in the loch. Another ghost, a mysterious man in grey, wanders about the castle ruins.

UPDATE: an alternative version of the ghostly daughter is that the devil offered the laird of Assynt help to build a castle in exchange for his soul. The laird, no fool he, wanted to be granted immortality. Negotiations were at an impasse until the laird's daughter appeared. The devil seized his opportunity and offered to build the castle if he could marry the daughter.

The laird agreed, the castle was built, and the wedding took place. But when the bride realised who her new husband was, she threw herself out of a castle window into the loch below, where she drowned. Now her ghost is left to wander the ruins, weeping.

In 1890 Sir John Sinclair was moved to write,

"It was without a doubt the scene of 'Many a wassail wild and deed of blood'; but now there is not a cat to mew nor a cock to crow, in the fortress of the Clan MacLeod."

On the southern shore of Loch Assynt, visible from the castle, is the roofless ruin of Calda House, the 18th-century residence of the MacKenzie chiefs of Assynt. When Kenneth MacKenzie II of Assynt brought his new wife Frances to Ardvreck, she, not unnaturally, found the castle a cheerless, uncomfortable place to live. In 1726 MacKenzie began building a more comfortable modern house within sight of the castle.

Taking its name from nearby Calda Burn, Calda House was built of imported sandstone and stood three storeys high, with 14 bedrooms and a large central chimney. Calda House was a mansion by the standards of the time, and the first symmetrical house in the north-west Highlands. It proved a popular design; the M-gable double-pile layout was used for other MacKenzie laird's houses throughout Wester Ross. 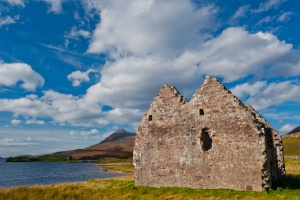 Unfortunately, the expense of the house construction, and Frances' extravagant living style, plunged the family into debt, and they were forced to sell to their bitter enemy, the Earl of Sutherland. Local MacKenzie retainers, determined not to let a Sutherland live at Assynt, burned down the house in 1737.

At least, that is the tale told by the local historical society. A more romantically satisfying version of events is that the MacKenzies held a banquet on a Saturday evening. The celebrations continued past midnight, into Sunday, when fire, perhaps started by a lightning strike, burned the house to the ground.

It was, said the locals, divine retribution for making merry on the Sabbath. The sole survivor was said to be a piper who refused to play past midnight, but the house has ever since been haunted by ghosts. Stone from Calda House was used to build the schoolhouse at Inchnadamph.

Today the impressive ruins face the equally impressive edifice of Ardvreck Castle across the curving sweep of Loch Assynt. The combination of the two ruins is an unforgettable sight in this magnificently scenic location.

Access to Ardvreck is extremely easy. There is a small parking area on the A837, north of Inchnadamph. There are interpretation panels and a short walk along the shore to the castle promontory. Be aware; this is the Highlands, and the ground can be very wet. Waterproof footwear is always a good notion! The castle ruins are not extensive, and you can easily wander around the entire site in 5 minutes. The castle is accessible at any time.

Ardvreck is set in stunning Highland landscape; it truly is a wonderfully romantic ruin, and well worth a visit for the atmosphere alone! 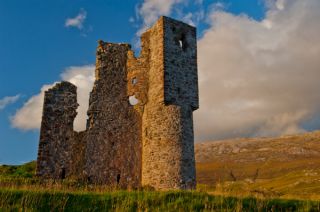 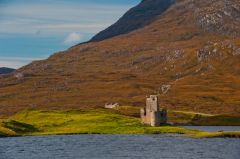 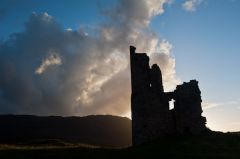 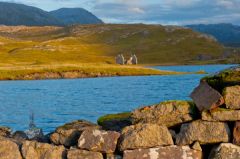 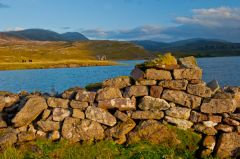 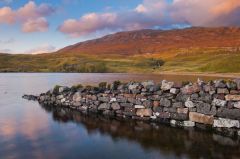 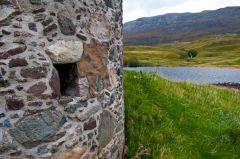 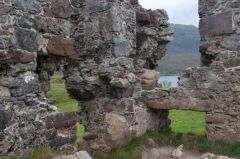 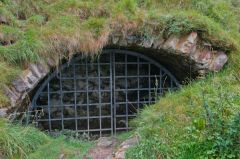 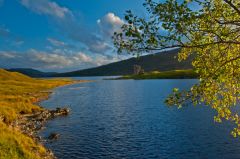 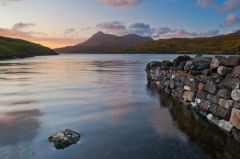 Nearby accommodation is calculated 'as the crow flies' from Ardvreck Castle. 'Nearest' may involve a long drive up and down glens or, if you are near the coast, may include a ferry ride! Please check the property map to make sure the location is right for you.

More self catering near Ardvreck Castle