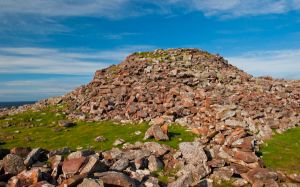 This Iron Age broch is set on a flat ledge of rock by the shore, at the south end of Clachtoll Bay, with a possible outer defensive wall 300 feet away. Though we don't know precisely when Clachtoll Broch was built, the most likely date is sometime between 100 BC and 100 AD.

There is not much left of the broch walls, which stand only two metres high at their highest point. The original broch would likely have reached 10 feet or more. The low entrance opening is capped with a large and very heavy triangular stone lintel, a common feature of brochs (see the photo of the entrance to Dun Dornaigil, also in Sutherland. Two upright slabs support the lintel stone. The entrance is only one metre high and one metre wide.

The broch reaches an external diameter of 16 metres (about 39 feet), and the interior is about eight metres across (about 25 feet). The interior is full of rubble from the collapsed walls, and only the central chamber behind the main entrance has been excavated and cleared of debris. 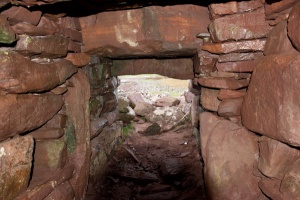 The walls are very thick, with a stair running inside the thickness of the wall. This again is common in broch construction (see photos of Dun Carloway on Lewis). You can clearly see the double-wall construction and several steps.

The main entrance passage gives access to a pair of guard chambers, one on either side of the entrance. An excavation in the early 20th century found a cup made of steatite (a variety of talc commonly know as soapstone) set in a niche in the side wall of one of the guard chambers.

If you feel energetic and are relatively flexible you can craw inside the broch, though please do take reasonable care, as this is an ancient structure!

The setting is marvellous, and access is straightforward. You can spot the low outline of the broch walls from the main road, near the old church. Even if you can't spot the broch from the road, don't despair! Just walk down to the shore and turn left. Its a bit of a scramble along the shore, as the beach is covered in large, round stones that keep sliding under your feet, but you should reach the broch in no more than 10 minutes stroll. 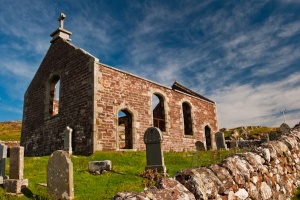 If you have the time, do take a look at the church. Though it is in Clachtoll, the church is actually known as Stoer Church. It was designed in 1828-9 by famed Scottish architect and engineer, Thomas Telford (or possibly by William Davidson). This 'Parliamentary church' was built to a standardised T-plan and made of coursed rubble.

The term 'Parliamentary church' is applied to a series of mass-produced churches designed by Telford for a Government commission set up to erect 43 churches and manses in remote areas of Scotland. It was not in use for long before it was abandoned, perhaps because it proved too small for the area's population. Now it stands roofless, yet otherwise externally complete. 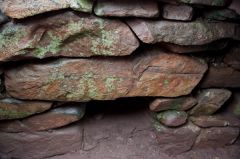 Nearby accommodation is calculated 'as the crow flies' from Clachtoll Broch. 'Nearest' may involve a long drive up and down glens or, if you are near the coast, may include a ferry ride! Please check the property map to make sure the location is right for you.

More self catering near Clachtoll Broch >>

The Royal Guesthouse - 53 miles
Dingwall, Highlands and Islands
From: £25.00