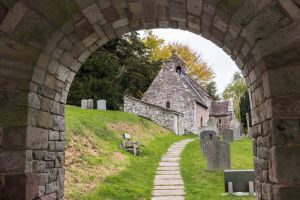 A 14th century church stands on the site of a 6th century hermit cell in remote countryside. The church is known for its superb 15th century rood screen and loft, medieval stone altars and wall paintings, pre-Norman font, and shrine of St Issui.

In the 6th century an early Christian hermit named Issui, or Ishow, founded a cell here on a sloping hillside beside a stream. The stream fed a well from which the hermit drew water. You can still see the well, just a short walk downhill from the churchyard and easy to spot, with strips of colourful cloth tied to branches of nearby trees. The well is known as Ffynnon Issui (St Ishow's well).

The hermit's cell and the well became a place of pilgrimage after Issui was robbed and murdered by a traveller who asked for shelter but refused to be converted to Christianity by the holy man. Issui was probably buried within his cell. Pilgrims came to visit the saint's grave, and the well, which was reputed to have healing properties. In the middle of the 11th century a pilgrim left a sack of gold to help pay for a new church. The result was a simple stone structure, probably the size of the current nave.

That early stone church was rebuilt in the 14th and 15th centuries, then again in the early 20th century.

Despite the rebuilding, a wealth of historic material remains, including a superb late 15th century wooden screen, made of Irish bog oak and intricately carved. The screen retains its loft, and the decorative carving on the loft is among the finest pieces of medieval art in Wales. It is said to have been made by Flemish craftsmen, but it is equally likely to have been made by skilled Welsh woodworkers. Look for figures of a fire-breathing dragon, St Mary the Virgin, and St John the Apostle.

The screen is a relative newcomer compared to the font, dated to 1055, and perhaps the oldest in Wales. It bears an inscription that translates as 'Menhir made me in the time of Genillin'. Genillin may refer to the 11th century heir of Rhys Coch, Prince of Powys, or to a 7th century ruler of Powys named Cynddylan. 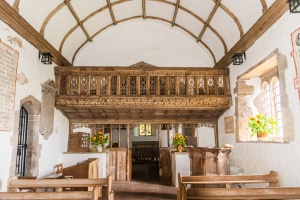 Looking down the nave to the screen 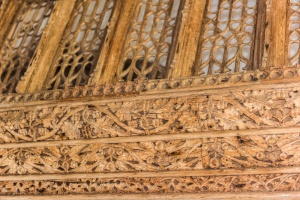 Carving detail on the screen 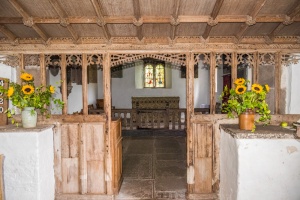 Passing through the screen to the chancel

On the west wall is a Doom, or wall painting depicting the Biblical Day of Judgement. Even more impressive is the striking figure of Time, in the form of a skeleton, holding the traditional scythe and hourglass, as well as a spade. The meaning would have been clear, even to a largely illiterate population; your days are numbered, so use them wisely. According to legend, the painting has been covered with whitewash several times but each time it mysteriously reappears.

The church nave is probably Norman, but the chancel is 16th century. Leading off the west end of the nave is a 13th century 'chapel of the grave', or Eglwys-y-Bedd, erected over the grave of St Issui. The grave site is beneath the altar and is marked by a slab incised with 6 small consecration crosses, one more than the usual 5 crosses. Is this really the site of Issui's grave? Well perhaps it is, for during restoration work in 1908 human bones were found under the chapel wall. 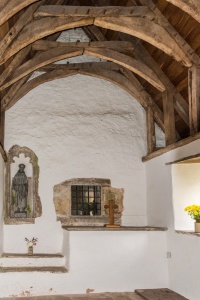 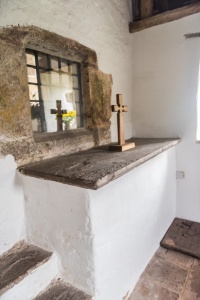 In 1188 Geraldius Cembrensis, the early Welsh historian, accompanied Archbishop Baldwin on a tour of Wales to raise enthusiasm for a Crusade. The Abbot preached here at Partrishow, probably using the stepped base of the ancient churchyard cross as his pulpit. But how did the cross survive the Reformation? In 1547 Henry VIII decreed that all such crosses be destroyed, and no doubt the cross at Partrishow would have been pulled down, but the church was so far off the beaten track that the king's men could not find it, so the cross survived intact.

As mentioned above, if you follow the steep lane down from the churchyard gate, you come to a small stone-lined well set back from the road. This is traditionally said to be the well used by St Issui, and is credited with healing powers. The well and the overhanging tree branches are festooned with small offerings, from crosses to personal objects, left by visitors. 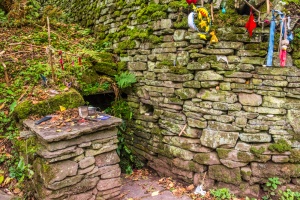 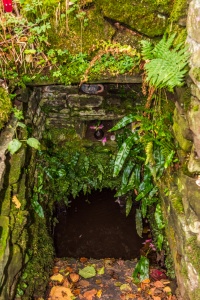 Looking into the well

Partrishow is located on a sloping hill in a secluded rural setting. Though the church is well signposted from the surrounding roads, its the sort of place you really, really don't want to meet another car coming towards you! The lanes are incredibly narrow and winding, but on the other hand that adds to the sense of remoteness and seclusion that seems to cling to the church.

When I arrived at the churchyard - using up most of what passes for a parking place with my little car, I found a couple of elderly men sitting against the church wall, having their lunch while they looked out over the valley. They were, it transpired, hiking the Beacons Way long distance trail. I envied them; for all the convenience my car gave me, to wander the beautiful Powys hillsides that led to Partrishow and arrive as an ancient pilgrim might have done, that seemed to me the ideal way to spend a few days!

There are some places where the past seems close to the surface, places where you feel a sense of something in the air, whether it is simply age, or the lingering aura of thousands of pilgrims. Entering the Eglwys-y-Bedd you feel like you are going back in time. Some churches are interesting because of their fine architecture, but St Issui's shrine is fascinating for its simplicity and sense of age. Partrishow is a special place, and I highly recommend a visit. Just be careful on those narrow lanes! 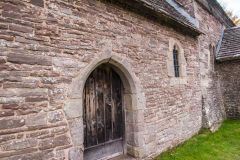 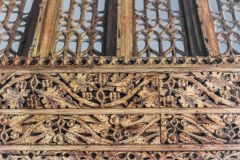