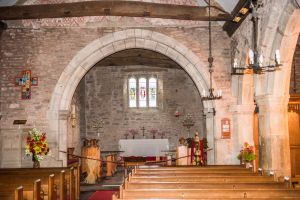 St Peter's is a 14th-15th century church in Perpendicular style, with several interesting 18th century memorials and a series of 'Brute angel' monuments.
History
The origins of St Peter's church seem to be a bit of a mystery. There is a written record of a church here in 1060, so it is possible there was an earlier church in the site, though no trace of an early building remains. The earliest part of the current building is the tower, which may date to the 14th century.

The remainder is probably 15th-16th century and is a good example of Perpendicular Gothic style. One interesting historical footnote; in 1785 wooden shutters had to be made for the east windows to protect them from ball games played in the churchyard.

Restoration in the 19th century unfortunately swept away much of the medieval church and its furnishings. The floors were lowered and the earth spread over the churchyard. 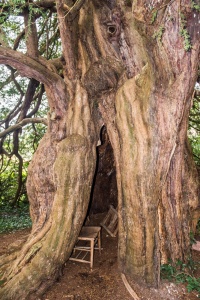 The Brute Angels
During the 18th century a local family of stonemasons named Brute became very popular for the distinctive figures of angels they carved on ornate funeral monuments. There are several examples of 'Brute angels' both inside and outside the church.

At least 4 generations of the Brute family trained as stonemasons, and over that time they produced a wealth of distinctive chest tombs, ledger slabs, grave stones, and painted wall monuments, most often in the Monmouth, Brecon, and Radnor area.

The first Brute mason was John (1665-1730), followed by Thomas, Aaron, and John Brute II, who died in 1834. That's over 150 years of Brute memorials. John Brute I did not sign his works, but over 70 have been found by the subsequent generations. Llanbedr has a particularly large number as does nearby Patricio (Partrishow).

Though the monuments are interesting, what I really enjoyed was discovering the ancient yew tree to the north east of the church. The trunk is huge, and when you wander around the trunk you realise that it is hollow. The space inside is so large that several chairs have been placed inside so that visitors can relax, enveloped by the tree.

According to the Ancient Yew Group the tree has a girth of 427 cm (just over 14 feet). The church website mentions that one of the yews in the churchyard is roughly 3000 years old, though it doesn't make clear which tree it refers to. That would certainly suggest that this spot was a place of worship long before Christianity came to this part of Wales. Indeed, the old Roman name for the settlement was Llanbedr Ystrad Yw, which loosely translates as 'Llanbedr by the yew tree'.

Also in the churchyard is the base of a churchyard cross, though the cross itself is lost.

Unfortunately, the church was undergoing restoration when I visited, and much of the exterior was covered in scaffolding, so I don't have any good exterior photos. The interior is a fascinating ix of 19th century restoration, and roughly formed early medieval stonework, reminding us of the ancient origin of the building. 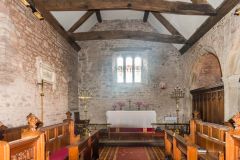 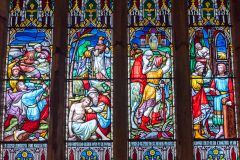 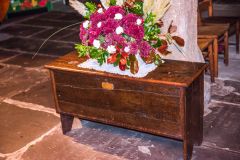 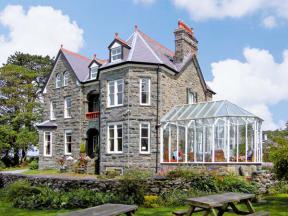 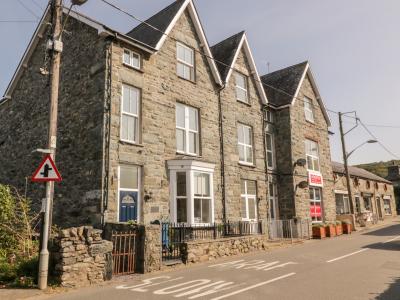