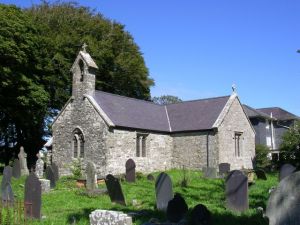 This cruciform shaped church boasts an ancient bell and a 15th century chancel. It stands on the site of a 6th century cell established by Gallgo and is one of the oldest Christian sites on Anglesey. The church is associated with the tragic shipwreck of the Royal Charter in 1859.

The church of St Gallgo can claim with some confidence to be one of the oldest Christian sites on Anglesey. Gallgo was the son of St Caw, from the Clyde valley who came to Anglesey in the early 6th century to escape the Pictish tribes then moving into what is now Scotland. Gallgo and his brother and sister were granted land on Anglesey by Maelgwn, King of Gwynedd. Each of the three family members established a llan, or church enclosure, within a mile or two of each other. There was a well near the cell, thought to have miraculous healing qualities. Each of the three siblings was buried in the oratories they had built. Nothing remains of these 6th century cells.

There was a church at Llanallgo recorded in 1254, but the oldest parts of the current building date to the 15th century. The only remnant of an earlier church is the bell, dating to the late 13th century. The bell has the imprint of a coin from the reign of Edward I, along with a Latin inscription that translates as 'Hail Mary full of grace'. The interior features a 1726 communion table and numerous memorials from the 17th-19th centuries. 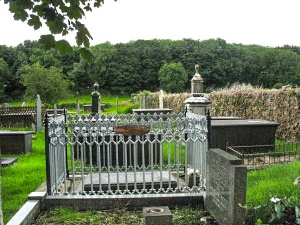 Rev. Stephen Hughes memorial (c) Eric Jones
Much older is the grave of poet Dafydd Trefor, who served as a rector of St Gallgo's in 1504. His grave is in the churchyard.

Despite its ancient origins St Gallgo is remembered primarily for one tragic 19th century event; the sinking of the steam clipper Royal Charter on 26 October 1849. The ship was bound from Victoria to Liverpool, bearing 400 passengers and a cargo of gold valued at 500,000 pounds.

The ship met a gale measured at Hurricane Force 12 on the Beaufort scale. The extreme winds drove it onto the rocks just north of Moelfre. The ship was pounded by high waves and started to break up. One extraordinarily brave seaman named Guzi Ruggier (Joseph Rogers) somehow managed to swim ashore carrying a line, enabling 21 passengers and 18 crewmembers to be saved.

Over 440 passengers and crew perished in the loss of the Royal Charter, the highest loss of life from a wreck on the Welsh coast. As bodies were fished out of the sea they were brought to St Gallo's, which served as a temporary mortuary. Rev Stephen Roose Hughes, rector of Llanallgo, conducted services for the dead in the nearby church school, helped by his brother Hugh, rector of a neighbouring parish. Hughes tried to identify the identities of the dead by their belongings and facial characteristics. He wrote over 1000 letters to the relatives and friends of the drowned. 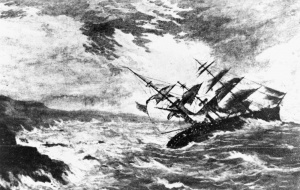 The wreck of the Royal Charter
Some of the gold on board was washed up on the shore, enabling some of the local families to become rich overnight. Or at least that's part of the mythology that grew up around the wreck. Some English newspaper accounts alleged that residents got rich on the spoils of the wreck and took advantage of grieving relatives. A group of locals called the Moelfre Twenty-Eight, who had been involved in rescue attempts, sent a letter to The Times of London trying to set the record straight.

Novelist Charles Dickens came to Anglesey to write about the tragic events of the sinking. He stayed with Rev. Hughes and was struck by the his enormous humanitarian efforts. Dickens wrote about the wreck in The Uncommercial Traveller.

Everywhere you look around the churchyard there seems to a memorial to someone who died in the wreck. In the graveyard is an obelisk acting as a memorial to the dead. It was erected by public subscription and originally stood inside the church, over the burial place of those who had not been identified, but it was moved into the graveyard in the early 20th century. 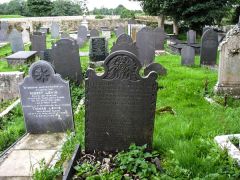 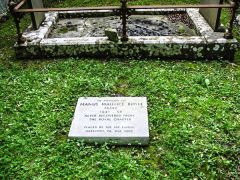