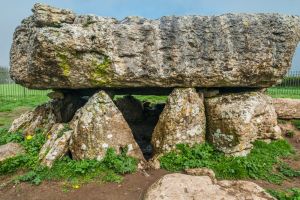 Lligwy Burial Chamber is a Neolithic cromlech composed of a huge capstone set atop a ring of eight small upright stones. The capstone seems to dwarf the uprights; it weighs an immense 25 tonnes and measures 18 feet long by 15 feet wide.

The cromlech was erected sometime around 3000 BCE and served as a place for communal burials. Excavations around the turn of the 20th century found the bones of over 30 adults and children, plus animal bones and pottery sherds.

The presence of pottery suggests that Lligwy was used for over 1000 years, well into the Bronze Age when such pottery began to be common.

It is possible to enter the cromlech, though it helps to be slender and a bit of a contortionist!

Just up the lane, a footpath leads to Hen Capel Lligwy ruined medieval chapel and to Din Lligwy ancient settlement. 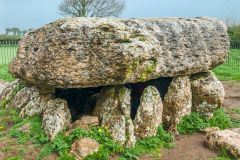 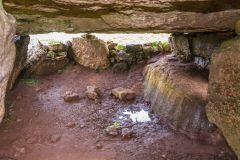 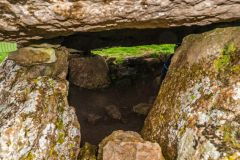