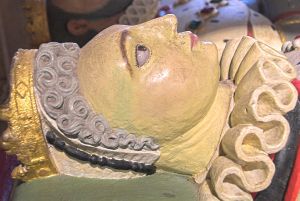 A small Benedictine monastery was founded by the Norman lord of Chepstow at the same time as the nearby castle. The monastic church survived the Dissolution of the Monastery because the nave was used as the parish church of Chepstow. The Norman nave survives, and the finely decorated 12th century doorway is not to be missed.

When William the Conqueror was successful in his attempt to seize the throne of England in 1066 he divided much of his new lands up amongst the Norman nobles who supported his conquest. One of the those nobles was his second cousin, William fitzOsbern. Shortly after the Conquest King William granted lands in what is now south-east Wales to fitzOsbern, who began to build a castle overlooking the River Wye.

At the same time as he was building Chepstow Castle, fitzOsbern founded a monastic cell. It was as much a practical decision as a religious one; the new foundation helped fitzOsbern collect rents from his new lands in Gwent, which he had granted to the Priory of Cormeilles in his native Normandy. The connection with Cormeilles continues today, as the French town is 'twinned' with Chepstow.

Within 50 years the monastic cell had become an alien priory in its own right, supporting as many as 12 monks. The new Chepstow Priory took over from an early Augustinian priory located over a mile away.

During the medieval period the nave of the priory church was used as the parish church, while the chancel was reserved for the monks. There was accommodation for the monks on the south side of the church, and the priory had a large tract of land within the town walls.

When the Hundred Years War severed links to foreign monasteries the priory became linked in turn to Llantarnam Abbey (Caerleon) and Bermondsey Abbey in Southwark.

The Priory was dissolved by Henry VIII in 1536, at which time it supported just 3 monks. Most of the monastic buildings were destroyed, and now lie beneath the nearby car park. The priory church, however, survived because of its role as a parish church. 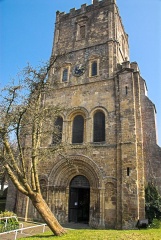 Though the building has been considerably altered over the years, several extremely fine medieval features remain, including a superb 12th century west doorway, decorated with traditional zigzag and lozenge patterns. Inside the church the best features are the massive nave pillars rising to an excellent vaulted ceiling.

Historic highlights include a pair of medieval fonts. One dates to the Norman period, the other is 15th century. But it is the wealth of medieval and later memorials that make the priory so enjoyable to visit.

Among the best tombs is that of Henry Somerset, the 2nd Earl of Worcester. Even more elaborate and colourful is the Jacobean memorial to Margaret Cleyton and her two husbands, with figures of her dozen children arranged on a frieze below effigies of the parents.

Another important historical tomb is that of Henry Marten, a close friend of Oliver Cromwell and one of the men who signed Charles I's death warrant. When Charles II regained the throne in 1660 he had Marten imprisoned in Chepstow Castle for 20 years until his death in 1680. Marten's imprisonment was so long that the tower inside the castle where he was held is still known as Marten's Tower.

Other highlights include an early 17th century organ. The organ was made for Gloucester Cathedral and was used in Bristol Cathedral from 1663 before coming to Chepstow around 1685.

I found Chepstow Priory enormously enjoyable to visit. The architecture is superb, especially the west front, but it is the collection of historical monuments that makes a visit truly memorable.

The priory church is open daily and is extremely easy to access, opposite the castle parking area and close to Chepstow Museum. 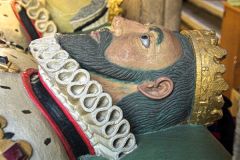 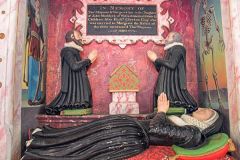 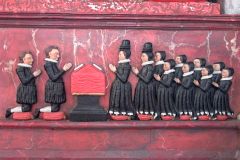 More self catering near Chepstow Priory >> 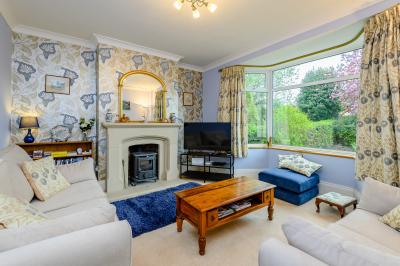 Caradoc is a spacious, three-storey holiday home resting in Tutshill near Chepstow, Monmouthshire and can sleep 10 people in five bedrooms.
Sleeps 10