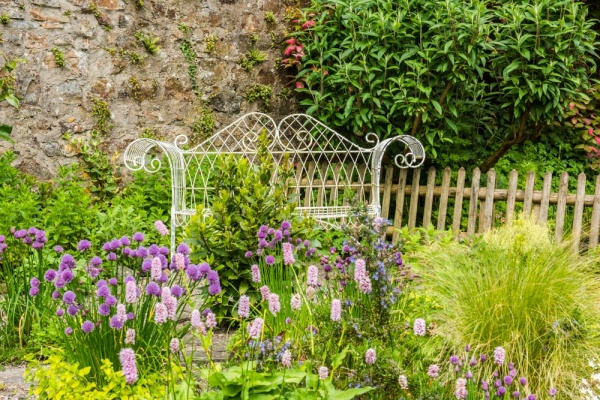 The walled garden at Colby Woodland Gardens
Colby Woodland Garden is a delightful landscape garden surrounding a 19th century country house on the outskirts of Amroth, Pembrokeshire. A formal walled garden leads to woodland walks through massed rhododendrons and a variety of unexpected tree species. he garden is at its best for rhododendrons and azaleas, and at its most colourful in April and May.

The Colby estate takes its name from John Colby (1751-1823), who mined the area for coal. You can still see evidence of mining about the estate, including the entrances to steeply sloped audits, where children were used to haul wagons laden with coal out of the narrow openings.

Colby Lodge was built from 1802, and though there may have been a garden around the house in the early 19th century, the gardens we see today really began after Samuel Kay, a wealthy pharmacist from Stockport, purchased the property in 1873. Kay only used the house as a holiday home, but he began to lay out and develop some of the main garden features. Later Kay owners added water features, extended the woodland area, and built a summerhouse in West Wood.

One of the more unusual features at Colby is a summerhouse designed by Lincoln Taber in 1976. The owner of Colby at that time was Peter Chance, head of the prestigious auction house Christies of London. Chance asked Taber to decorate the interiors of his octagonal summerhouse with a series of trompe l'oiel murals of outdoor scenes. 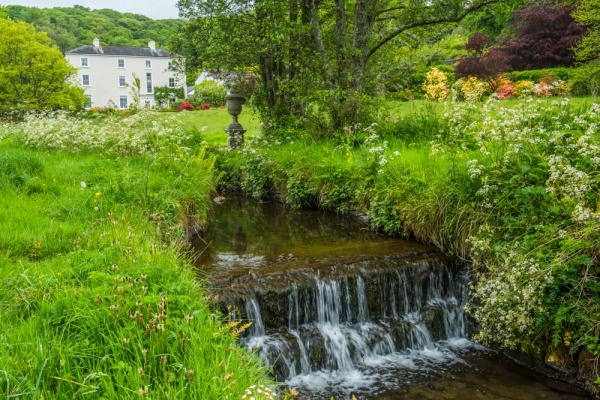 A waterfall below Colby Lodge

One panel depicts a view of a path leading deeper into the garden, which could only be seen when the doors had to be closed due to inclement weather. The ceiling of the summerhouse is painted with signs of the Zodiac, each representing a person involved in creating the summerhouse.

The Chance owners left the estate to the National Trust, along with a bequest to pay for a sumptuous planting of rhododendrons.

Though Colby is first and foremost a woodland and meadow garden it also has a delightful walled garden, created from the original kitchen garden for Colby Lodge. This formal area hosts some unusual trees, herbaceous borders, water features, and attractive shrubs. At the top of the garden is a 19th century gazebo in Gothic style.

The garden is home to colourful displays of magnolia, shrubs, and rare trees. Water runs down a stone channel from the gazebo and sculptures are scattered throughout the garden to create a rather whimsical environment.

Below the walled garden a network of trails leads through woodlands around the Lodge. One trail leads up to the Summer House, where you can get wonderful views over Carmarthen Bay on a clear day. The acidic soil at Colby means that magnolias, Japanese maples, and camellias flourish in the woodland areas.

The woods surround a large, open meadow where wildflowers flourish. A stream runs through the meadow and tumbles over a picturesque waterfall. It is hard to imagine that this peaceful setting was once a thriving industrial site, with busy mines and industrial buildings spotted around the estate. 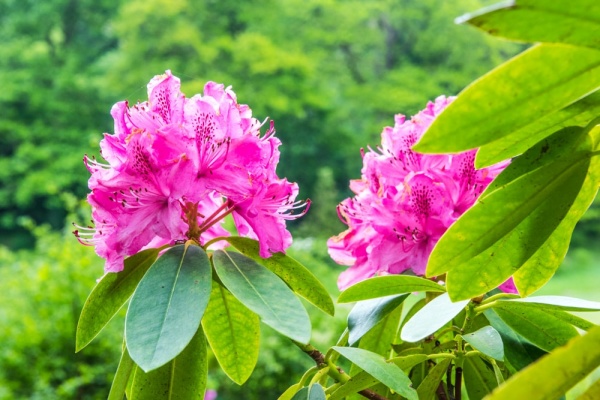 Rhododendrons in the woodland garden

Rhododendrons are the star species at Colby. They thrive in the woodland and near the newt pond. Other star species include Japanese redwood. Colby is home to the tallest Japanese redwood in Britain. You can find the tree, which reaches 134 feet high, beside the newt pond. The woodland is home to a large wildlife population, including an occasional otter.

When we visited we were delighted to find that the National Trust is developing colour-coded footpaths throughout the estate, sop that even if the woodland gardens are closed you can still explore the surrounding woods. One trail leads down to the beach at Amroth, while another explores Craig-y-borion Wood, following the course of a small stream.

The garden is signposted off the A477 north-east of Tenby. You can also reach it via a footpath from Amroth beach. The garden entrance is just a few hundred yards from Amroth's medieval church.

We found Colby Woodland Garden to be a delight to visit. The walled garden was an unexpected delight, and the woodland garden was a fascinating place to wander, especially because of the remaining examples of mining heritage that you can still see around the estate, in addition to the beautifully lush colours and unusual examples of trees. 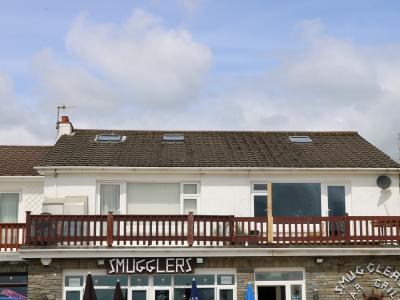 This seaview, contemporary property is located in Amroth, Pembrokeshire in Wales and sleeps five people in two bedrooms.
Sleeps 5 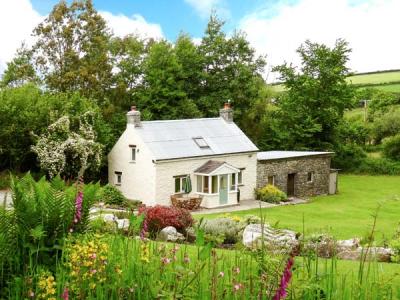 This detached cottage is located near to Amroth in Pembrokeshire and can sleep six people in three bedrooms.
Sleeps 6