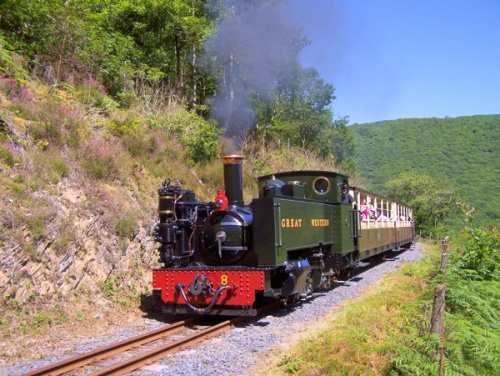 This historic narrow-gauge steam railway passes through fabulous scenery on its journey from Aberystwyth to Devil's Bridge. The train climbs to 200m (700 ft) over the almost 12-mile course of the journey. At Devil's Bridge, you can pause to view the famous waterfalls eulogised by Wordsworth.

In 1897 an act of Parliament authorised the building of a narrow-gauge light railway between lead mines in the Cambrian mountains to the coastal port of Aberystwyth, on Cardigan Bay.

The viability of the line was dependant on the success of the Rheidol Lead Mines, however, and that proved problematic, for the mining industry was tenuous. In addition to lead ore, the railway carried timber for use as pit props in the coal mines of southern Wales and did a brisk trade carrying holidaymakers to the seaside. In 1912 control of the line passed to Cambrian Railways. 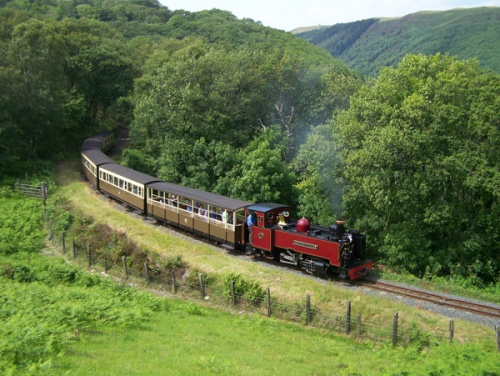 The Rheidol Lead Mines closed after the outbreak of World War I, but after the war was over the railway had a rebirth, carrying holidaymakers to the seaside. In 1923 Cambrian Railways folded and the line came into control of the Great Western Railway.

The GWR closed the freight services and relied solely on passenger traffic. even that service became seasonal in 1930 and was suspended at the outbreak of WWII in 1939. In 1948 British Railways took over the Rheidol line and kept it active until 1989 when it was the last steam railway in British Rail care.

After BR was privatised the Rheidol line was taken over by a local charitable trust, who have restored both engines and the rail line.

All the rolling stock in use today were built for the Great Western Railway specifically for use on the Rheidol line, between 1923-1938. There is regular train service throughout the year, though departures in the winter months are limited. Tickets can be booked in advance or purchased on the day.

The main stations are at Aberystwyth and Devil's Bridge, but there are intermediate stations at Llanbadarn, Glanyrafon, Capel Bangor, Nantyronen, Aberffrwd, Rheidol Falls and Rhiwfron, where the train will stop on request.

Photos are © Vale of Rheidol Railway, used by permission.

More self catering near Vale of Rheidol Railway

More bed and breakfasts near Vale of Rheidol Railway

Self Catering near Aberystwyth