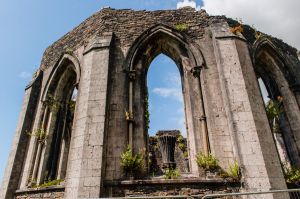 Margam Abbey
Founded in 1147 under the patronage of Robert of Gloucester, Margam at one time possessed over 18,000 acres. Some of the abbey buildings have now been incorporated into Margam Country Park. The nave of the Cistercian Abbey is still used as the parish church.

Once the richest and most powerful monastery in Wales, Margam was founded in 1147 by Robert Consul, the Earl of Gloucester and Lord of Glamorgan. Margam was a daughter house of Clairvaux, in France, and monks from Clairvaux were sent across the Channel to begin the abbey. The Earl's original gift included 18,000 acres of land, but the monks of Margam gradually acquired estates along the south Wales coast. 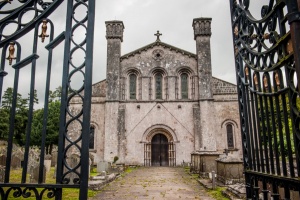 By 1336 there were 38 monks and 40 lay brothers at Margam, but the abbey, like much of Glamorgan, suffered during Owain Glyndwr's rebellion, and by 1412 the monks and abbot were recorded as wandering like vagabonds. By the time Margam was dissolved in 1536 there were just 9 monks left.

The monastic site was granted to Sir Rice Mansel of Oxwich. Fortunately, the nave of the abbey church was spared, to be used by the parish. Sir Rice built a new house at the east end of the church near the site of the chapter house ruins.

The church at Margam is remarkable in that so much of the 12th-century abbey nave has survived, and it is among the best examples of the Cistercian ideal in Britain. Most of the original west front is intact, with its central circular window and striking corner towers, though the upper section of the nave walls are not original, nor are the aisles.

The nave arcades are supported on rectangular piers, creating a very austere and simple style in accordance with early Cistercian values. By contrast, the west front looks almost Italianate, making you wonder at first glance if it is really medieval at all. The west door, with its nicely carved capitals, is original, as are three large lancet windows above it.

Much of the church furnishings are the result of a Victorian restoration under the patronage of Theodore Rice Talbot of Margam Castle. Talbot commissioned Edward Burne-Jones to design 3 windows for the west wall, which were made by the William Morris Company. 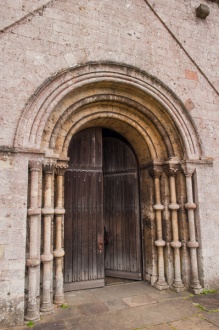 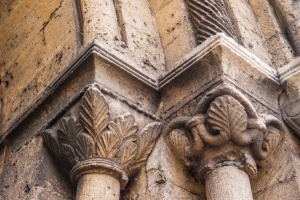 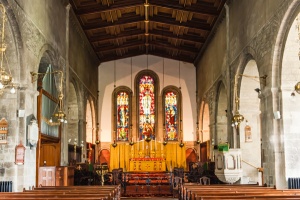 In the south-east corner of the church is the Mansel Chapel, housing tombs to generations of the Mansel family of Margam. At the centre of the chapel are four large table tombs made of alabaster, commemorating owners of Margam after the Dissolution.

These are among the finest Reformation tombs in Wales, a testament to the wealth and social standing enjoyed by the Mansel family. Each tomb shows the male in full armour, his wife in domestic robes of the time. The carving detail is exceptional, giving a very good idea of the clothing styles.

The final table tomb is to Sir Lewis Mansel (d. 1638), who was married to Elizabeth, daughter of the Earl of Manchester. The walls of the chapel have lovely mural tablets, not quite so elaborate as the alabaster tombs, but still very impressive. These include Sir Rawley (or Rawleigh) Bussey (d. 1623). 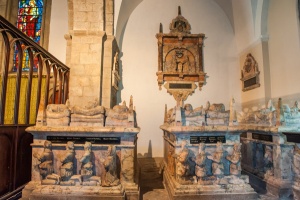 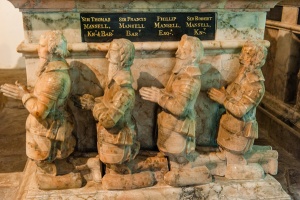 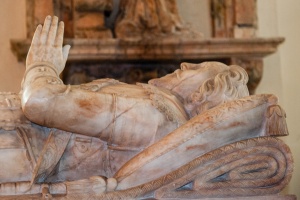 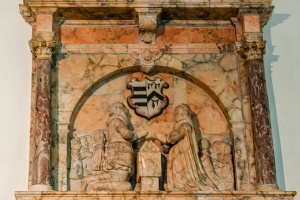 In the opposite corner of the church, behind the oversized organ (inserted by Christopher Rice Mansel in 1866 for the wedding of his daughter Bertha), there are further memorials. This area is usually locked, but we struck up a conversation with the volunteer attendant and he very kindly asked if we'd like to see the tombs. Of course!

On the wall is a monument to Sir Christopher (d. 1890), Lord Lieutenant of Glamorgan and the builder of Margam Castle on the hill overlooking the abbey site. In the centre of the chamber, and stretching almost to the ceiling, is a grandiose monument to Theodore Mansel, Christopher's son, who died of a foxhunting accident in 1876. The monument looks remarkably like the shrine of a medieval saint. Compare it, for example, to the shrine of St Alban in St Alban's Cathedral. 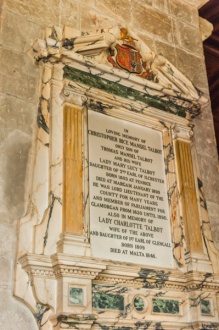 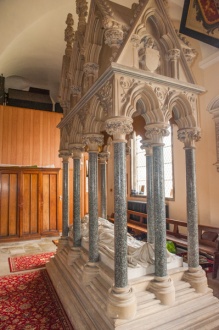 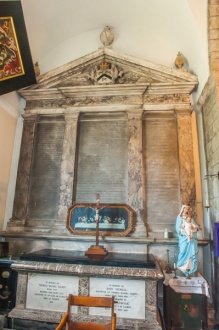 In the country park, and accessed through the south aisle of the abbey church, are the ruins of the monastic chapter house and fragmentary walls of the east range. The chapter house is architecturally stunning, built with 12 sides, about 50 feet in diameter, about 1200. It was lit by tall lancet windows, and the roof was supported by a single, central cluster of slender shafts rising like a tree spreading its branches. 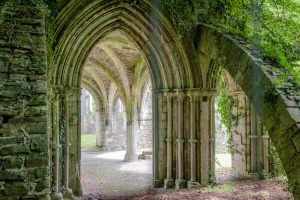 Arches in the chapter house 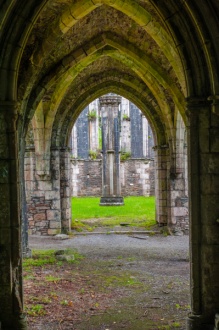 Looking into the
chapter house

Margam Stones Museum
At the far north-western end of the abbey churchyard is the Margam Stones Museum (run by CADW), where you can view some wonderful carved Celtic stones gathered in the area, some inscribed with Ogham. The best relic is the Cross of Conbelin, a 10th-century disc-headed cross.

It is amazing that Margam is not better known; the quality of the 12th and 13th-century architecture bears comparison with many more famous Cistercian churches and monasteries in England.

More self catering near Margam Abbey >>