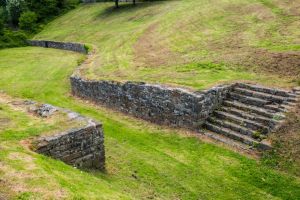 Carmarthen was a Roman "civitas" or tribal town of the Demetae tribe. The Romans established a presence here in AD 75 with a military fort, but the civitas soon grew to include an amphitheatre, the remains of which are still visible.

The first Roman fort may have replaced an earlier hill-fort atop Merlin's Hill. The association with Merlin is just part of Carmarthen's early mythology; according to some stories Merlin the magician was born in a cave just outside of Carmarthen.

The fort was occupied until around AD 120 when the focus shifted to the civilian vicus, or town. Most of the Roman sites lie under the streets of modern Carmarthen. Finds include a ditch and bank around the town, and the remains of a late 1st century Romano-British temple.

The amphitheatre is the most westerly in the Roman Empire and is one of only 7 remaining in Britain. It is the only example of Roman Carmarthen to be visible above ground today. 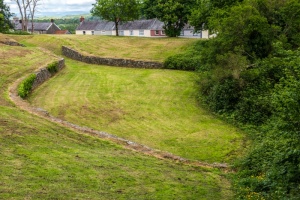 The amphitheatre from the west

The inner seating area, called the 'cavea' is 46m x 27m and would originally have had wooden benches for spectators. It is now turf covered and slopes down to the reconstructed wall of the arena.

What happened in the amphitheatre?

The amphitheatre would have been used for a variety of spectator sports, from gladiatorial combats to public executions and contests between beasts and humans. Less bloodthirsty entertainments would have included civic and military parades and celebrations of religious holy days. It is worth noting that the amphitheatre would not only have been used by the residents of the Roman civitas, but by the neighbouring Celtic Demetae tribe.

Objects found during excavations at the amphitheatre and at other Roman sites around the town can be seen at the Carmarthenshire County Museum at Abergwilli.

The amphitheatre is off Priory Street. Unfortunately there are no pedestrian signs or brown tourist signs pointing the way. I had to stop a local resident and ask where the Roman Amphitheatre was located. Thankfully it proved very easy to find.

From the St Peters car park head east along Priory Street, cross the roundabout at the Old Oak Lane junction, and carry on along Priory Road until you see the amphitheatre on your left. The site is about 300 metres from the car park and took us about 8-10 minutes to reach. There is a single information panel at the site entrance, which doesn't give a great deal of information about the layout of the remains; you are really left to use your imagination to picture what the amphitheatre would have looked like in the Roman period. 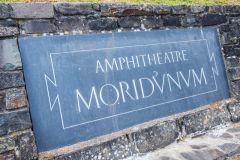 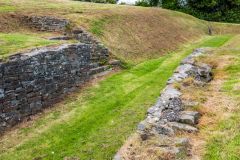 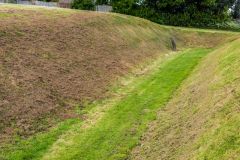 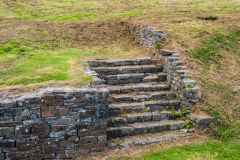 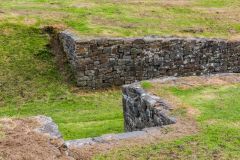 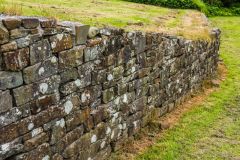 This lodge is located near the town of Carmarthen close to Llanelli and can sleep two people in one bedroom.
Sleeps 2

This barn conversion rests close to the town of Carmarthen and can sleep six people in three bedrooms. wifi
Sleeps 6