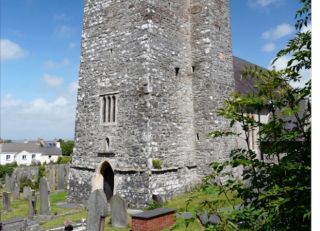 There was probably a 6th-century llan here, but the church we see today is a product of the 13th century, built by the Order of Knights Hospitaller. The sturdy, fortified tower served a dual purpose as a refuge for villagers during the turmoil of the Norman subjugation of south Wales.

Atop the west tower is a very large stone block called the 'Parson's Bed'. There is nothing domestic about the stone, however; it served as the hearth for a fire beacon to alert the local inhabitants of a threat from land or sea.

The most interesting historic feature is a curious carved 'leper stone' on display in the porch. The stone, a rectangular block of limestone roughly 2 metres long, is carved with animal and human figures and was found near the tower in 1880. It may have formed part of a Viking 'hogback' tomb.

The figures are puzzling, but the Royal Commission on Ancient and Historical Monuments suggest that they might represent the Biblical tale of St Paul and St Anthony meeting in the desert.

In front of the church is a broken Celtic wheel cross dating to the 11th century. The upper part of the cross is lost, but you can still see the large, curved arms that form the lower sections. The stone is known as 'the Pillory Stone'; perhaps it was used for whipping criminals?

At the church gate is a stone commemorating the lost medieval village of Llanelen. According to local folklore, a ship foundered in the Burry estuary, and survivors from the wreck made their way up the hill to the village of Llanelen to beg for shelter. They were welcomed in, but unknown to the villagers the castaways carried the plague, and before long the entire population of the village had died from the illness or fled in fear.

We're on shaky ground here, but one possibility is that the name comes from Tryrulhid, the wife of St Illtyd. Alternatively, 'she' was actually a 'he', and was a 6th-century Celtic monk. As for St Illtyd, an ancient holy well on the edge of the village is named for him.

The church is usually locked, but the petrol station at the top of the village keeps a key for visitors.

More self catering near Llanrhidian, St Rhidian and St Illtyd >>