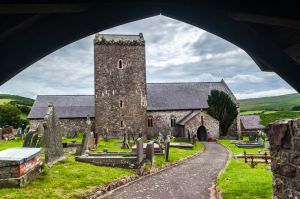 St Cenydd's Church in Llangennith is the largest church in the Gower and boasts a massive stone tower with a distinctive saddleback roof. The church is built on the site of a priory established by St Ceyndd. Cenydd was born in the area, a fact brought home by an information panel in the church with the rather humourous and eye-catching title 'Local Boy Makes Good'!

Cenydd, variously known as Cynydd, Kynyd, and Kenneth, established a priory here sometime in the 6th century. The circular shape of the churchyard is typical of Celtic llans, or church enclosures. Cenydd's church was built of wood and was burned in a Danish raid around 986AD.

In the late 11th or early 12th century, Cenydd's church was rebuilt in stone under the new Norman lords of the Gower. We do not know exactly when it was built, but records show that it was consecrated by Bishop Herewald, who died in 1104. In the 13th century, the carved north doorway was added, and the east window inserted in the 14th century.

A late medieval priory stood beside the church until at least the 15th century (where College House is now). The base of the tower still shows signs of a Norman doorway that may have acted as an entrance to the priory. The priory was a daughter house of Evreux, in France, a fact that did not escape the notice of Henry V in 1414.

Henry was desperately in need of money to finance a war with France - a war that would soon bring him his famous victory at Agincourt - so he seized the revenues of all 'alien houses' like Llangennith. Henry did not take all the priory's revenues for himself, however; the records show that he granted a pension of 20 pounds to a Flemish knight with the unlikely name of Sir Hortonk van Clux. 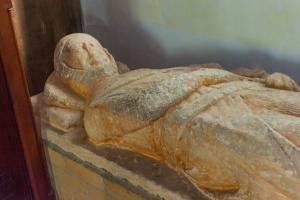 The All Souls College Connection

In 1442 Henry VI granted the tithes from Llangennith to All Souls College, Oxford, and All Souls retained the property until the 19th century. The college administrators must have wondered if the connection was beneficial, however, as the priory fell into disrepair after the Reformation, and in the 16th century they leased it out for farming.

You can still see the place where a cowshed attached to the west wall of the church. A farmhouse called simply 'College' was built to the south-east. Around 1870 this was rebuilt as the present College House.

The All Souls connection ended in 1838 when the college granted the property to Major Thomas Penrice in exchange for Penrice's estates in Northamptonshire. Major Penrice's nephew then gave the church to the people of Llangennith. 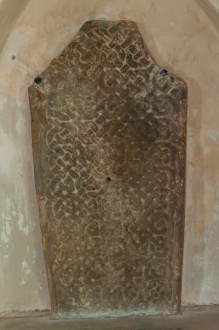 St Cenydd's houses two historic treasures, each connected with a different time-period in the development of the Gower. From the Celtic era comes St Cenydd's Stone, which the informative church guide describes as 'the jewel in the crown'. This intricately carved stone is decorated with traditional knotwork patterns and is set in an alcove on the south side of the chancel arch.

Variously - and somewhat romantically - described as Cenydd's tombstone, or a holy stone, this large piece of Pennant sandstone comes from the far side of the Loughor estuary and is probably part of a Celtic cross.

The style of carving suggests a date sometime in the 9th century, well after Cenydd's era, though it could plausibly have been used to mark the site of a shrine to Cenydd. For many years the stone was set into the floor of the chancel, but when the church was renovated in the 1880s the stone was removed from the floor and stored in the vestry.

In 2008 a further restoration uncovered a medieval niche beside the chancel arch, and St Cenydd's Stone was moved to the niche so that visitors could appreciate it.

Beside the north door, to your right as you enter, is the other major historic treasure of Llangennith's church, the 'Dolly Mare', a much-worn effigy of a medieval knight. The name 'Dolly Mere' is a mangling of 'de la Mare', as the knight is thought to belong to that Norman family.

Though time and erosion have worn away much of the detail, enough remains to give a good idea of the knight's style of armour. Beside the Dolly Mare is the very simple font, probably of medieval date. 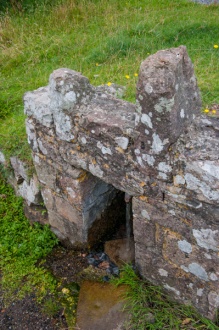 Just opposite the lych gate (the only one in the Gower) a small spring gushes forth, protected by a stone wellhead. The spring is one of several in the area connected to legends of St Cenydd.

The church was open when we visited on a weekday in August. If it is closed then the key can be obtained from the surf shop immediately beside the churchyard.

Parking is at a premium in Llangennith; we parked up a residential side street and walked 5 minutes to the church. As you pass through the lychgate into the churchyard, notice the carved symbols on the gate, illustrating events from the life of St Cenydd. 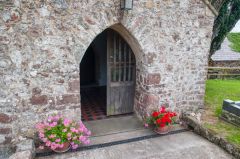 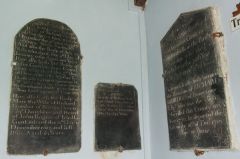 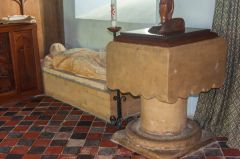 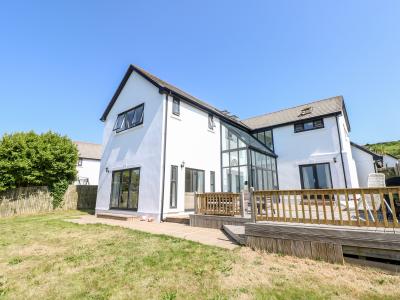 This detached cottage is situated in Llangennith, South Wales and can sleep eight people in four bedrooms.
Sleeps 8