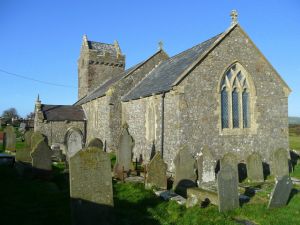 Llanddewi, St David's Church
St David's is a 12th-13th century church with intriguing memorial slabs, the largest bell on the Gower, and a Norman tub font.
History
The church is said to have been built by Henry de Gower, the 14th century Bishop of St David's. The archaeological evidence suggests an earlier date, however, so perhaps Bishop de Gower merely rebuilt an existing church. The north nave window appears Norman, and the simple tub font certainly appears to date to the 12th century.

Henry de Gower established a Bishop's Palace nearby, and the manor of Llanddewi was the parish. It is possible that the first church was simply the nave, as the chancel and tower are both linked to the nave by similar pointed arches.

The builders may not have been sure what they were doing, for the chancel and nave do not align. One theory is that the chancel is deliberately angled as a reminder that Christ's head leaned to one side on the Cross. This type of construction is called a 'weeping chancel'.

Another, less religious interpretation, is that the nave and chancel were built at different times and the builder's measurements were out. The tower is also slightly askew from the line of the nave, though less markedly than the chancel.

In the south nave wall is a reset 14th century window. There is a memorial slab to Rev Silvanus Prosser (d. 1737). The west tower has a single bell, thought to be the largest - and loudest - on the Gower peninsula, cast in 1781.

Historical records show that the church once had a very large and ornate squire's pew known as the Henllys Seat, but this was removed during a restoration in 1876.

Visiting
St David's stands in a farmyard, on the Gower Way walking trail. To reach the church, take the A4118 from Swansea towards Port Eynon, pass through Knelston village, then take the road signposted to Burry Green, then left into a narrow lane which ends at a farmyard. The church is to your right. The church is usually open daylight hours 'in season', that is, from spring through autumn.